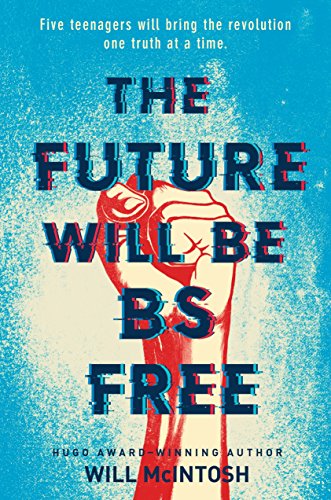 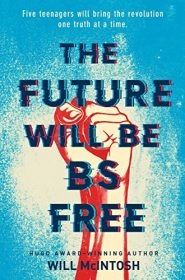 The world in Will McIntosh’s The Future Will Be BS Free isn’t that hard to imagine. An authoritarian wannabe is president of the United States, she has close ties to Russia, the rich are getting richer, and lies spewed directly from the White House permeate national conversation. But what if those lies could be more easily rebuked? What if they couldn’t lie at all?

In this future world, Sam and his friends are determined to make the world a better place by making lying a thing of the past. They spend all their time after school working on an infallible lie-detection app, and the closer they get to finishing it, the more dangerous things become. They start turning on each other, the president offers them millions, one of them is murdered, and they have to go on the run. Is the truth worth it?

At first the idea of no lying sounds fabulous. We could hold politicians accountable and people would start trusting the news again, and this is exactly the hope for Sam and his friends, but just imagine not being able to lie at all. If we think family dinners are difficult in our current political climate, they would be ten times worse with a truth app. But what about on a bigger scale? What if all the conspiracy theorists felt like they could be truth vigilantes?

Questions like that are explored in this story, making it much more intriguing than I thought it would be, but it didn’t go as far as I would’ve liked. At times it was a bit outlandish and silly, but if the silliness were more fully explored I think I would’ve liked it more. I wanted the story to dive into the upending of society that the app brings about, but it all felt a bit rushed. It was a great start, but it needed more to pull off a completely fulfilling ending for me.

Overall it was fun, the friendships between the kids were sweet and realistic, and the effects of the truth app are thought-provoking, but don’t go into it looking for anything more than a fun ride.