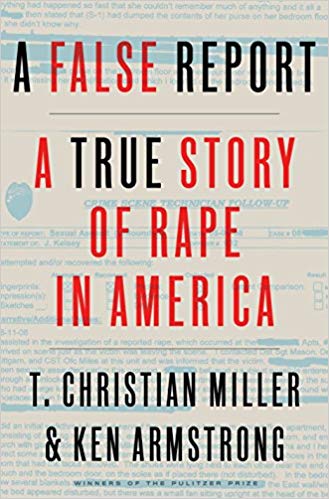 A False Report: A True Story of Rape in America by T. Christian Miller and Ken Armstrong is an in-depth look at reported rape cases in America. From Marie who is accused of falsifying a rape, to a string of women whose rape cases sound eerily familiar, to a historical view at how this country has viewed accusations brought forth by women, A False Report is a solidly researched journalistic view at where we are, where we’ve been, and how far we need to go. 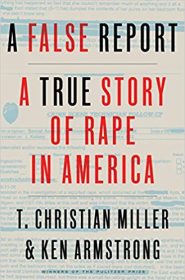 I say this is a journalistic view because this is written mostly as the facts, just the facts. There isn’t much emotion involved, and there are no graphic, intensely detailed rape scenes. I read some reviews where people wanted more emotion, but I welcomed having an emotional distance from the horrific events. It doesn’t mean that reading this isn’t horrific, though. Reading all the facts, seeing how the police questioned women, especially those who had a sordid past, and getting insights from the rapist on how he stalked and took pleasure in this is still quite horrifying. I honestly don’t know if I could’ve made it through the whole book had more details and emotions been inserted, and quite frankly, it wasn’t hard to fill in the blanks on my own.

Through interviews, police documents, news reports, and court records, the authors pieced together the process that happens when one reports a rape. It’s long, meticulous, demeaning, and overwhelmingly aggravating to see how this process works. And it’s even more aggravating to read the sections of the book that highlight how women have always been given the side eye when reporting sexual assault. Quotes from Thomas Jefferson, an early Supreme Court Justice, and an historic leading legal expert infuriate me, but they sit right alongside current cases where officers assume a pregnant teen just wants revenge, or the first thing they ask a rape victim is how much marijuana they smoked that night.

We have a long way to go. This book doesn’t give any insight in where we may be going, but it definitely shows us that we need to do better. Believe women.