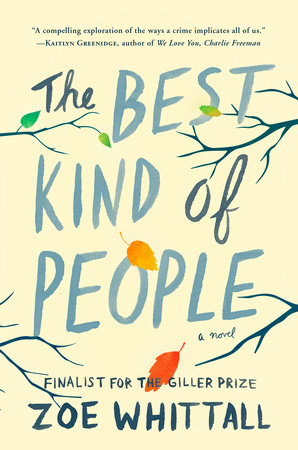 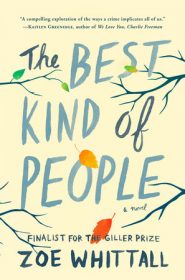 The Best Kind of People by Zoe Whittall is a very timely book. What does a family go through when a loved one is accused of sexual assault?

Science teacher George Woodbury is the prep school and town darling, winning teacher of the year every year since he stopped an armed man from wreaking havoc in the school. Years later, when girls accuse him of sexual assault on a class trip, the town and George’s family is shocked. Is it true? If it is, can you love and support someone who has done something so bad?

Joan is George’s wife and she’s blindsided. It can’t be true. They must be lying, but why? Sadie is their 17-year-old daughter. One of the accusers is the younger sister of her best friend, so why would she lie? Andrew is Sadie’s older brother, and no matter the truth, the family should support his father.

This story doesn’t revolve around the sexual assault, but instead around George’s family. In the beginning days, it’s shock and chaos with camera crews camped outside their house, following them everywhere. As days go on, shock turns into denial and anger and back again. Their feelings are never settled and how they handle them carries into other parts of their lives.

To uncover more about each character, the chapters jump back and forth between them, and the story slowly unfolds as things in their pasts are revealed to show how they got to this place. While there are other things that keep the plot going, like relationship and work troubles, this is really about how this affects them all.

This was a very interesting read if you think of all the allegations we’re hearing about now. How could their family not know, some people question, or they assume loved ones missed easy telltale signs. But it’s really not that black and white, is it? In this story, none of them knew and their reactions and the problems it caused all seemed very realistic. This deep character analysis gives a unique vantage point that we may overlook when we hear of allegations like this.