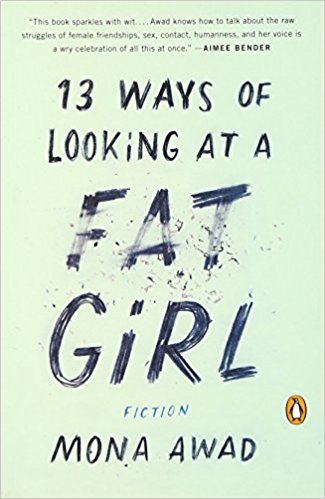 I’m not sure why so many people who read Mona Awad’s collection of linked short stories, 13 Ways of Looking at a Fat Girl, found it so funny. What was hilarious? The way the main character Lizzie/Liz/Elizabeth hated every woman she came into contact with? How all the thin women were petty, vapid, and stupid? How she constantly described women as whorish? Was it when she calls some girls ‘laughably obese’? Or was it the way, when she was fat, that she always had loads of sweets and homemade fudge around, and would moan about not having eaten in hours?

Because as far as I could tell, 13 Ways of Looking at a Fat Girl was just every stereotype you’ve ever read or seen about fat women thrown into one book and I guess it’s satire? Only it’s the way people really see fat women.

The problem isn’t that Lizzie is fat, the problem is that Lizzie is a one-dimensional character. There’s no nuance here. We can’t even tell what Lizzie really wants because what it seems she wants — a smaller body, a husband — she gets and is still miserable. And there’s no self-reflection here, no self-awareness. Lizzie is oblivious to how harshly judges every woman around her based on their appearance. And maybe this she is supposed to represent the way society views women? Maybe? I don’t know.

For me satire has to go over the edge near the absurd, and the way Lizzie thinks and acts is just the way like really is.

As I was reading this one, I googled the author. I wanted to see if Mona Awad was fat, and from her picture she doesn’t look fat. That doesn’t mean she isn’t fat or hasn’t been at some point in her life. She doesn’t write like someone who has been fat. At one point she has Lizzie looking at all her clothes, this is when she is still fat, and Lizzie says something like, “I looked at all my plus-sizes clothes spread out on the bed.”

Fat girls don’t refer to their clothes as plus-sized clothes. We just call them clothes.

At another the author has a group of men discussing sex with fat women. One of them men talks about having sex with a woman who was a size 12. I don’t know any men who could look at any woman and guess what size she was. I don’t think this is a thing men know.

The book is just awful and, frankly, offensive. I haven’t been this offended by a book since I read A.S. King’s Everybody Sees the Ants, which is also rife with harmful, negative fat shaming.