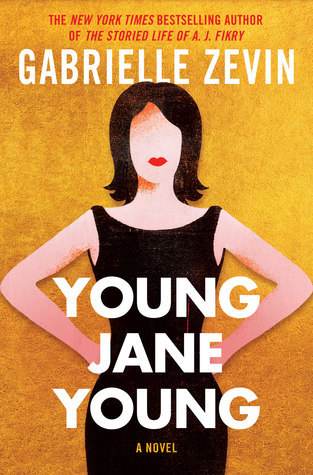 I have a bone to pick with Jane Young/Aviva Grossman. In 1999, you could not just flop down on the bed of your dorm room with your laptop (which would have had to been plugged into a modem) and start a blog. That’s not how it worked back in the olden days. No. You would have had to register a domain name and secure web hosting. You would have had to learn at least four chapters in HTML for Dummies and then, only then, could you have started a blog. Also, that blog wouldn’t have had comments. Though, yes, she might have used Open Diary an early blogging community that did include comments. But Jane/Aviva didn’t strike me as quite that nerdy.

Aviva is the protagonist of Gabrielle Zevin’s compulsively readable if not totally believable novel Young Jane Young. Her story spools out in past and present from her mother, her teenage daughter, the wife of the congressman she slept with in her 20s, and in her own words.

Young Jane Young is an updated re-imagining of Monica Lewinksy’s story. A young women in a powerless position engages in a sexual affair with with a married politician and has her life ruined when the affair is revealed. The man, of course, remains unscathed. The story is not new. Zevin’s thoughts on slut-shaming, feminism, and the forever-ness of the Internet are not new or ground-breaking.

And yet. . . this story is a fun and funny romp through a woman’s life and how she comes to terms with her past. Even with the blog stuff, which is total bullshit, I still liked it. As someone whose blog turned 17 in July I can’t seem to let go of how none of the stuff Aviva talks about re: the blog (which plays a pivotal part in her public shaming) is how things actually worked. At some point, in 1999 or 2000, Aviva makes a crack “They didn’t even know what a blog was until I told them.” NOBODY DID. The ubiquity of blogging was still a good five, six years away.

It’s one of those things where the timeline doesn’t quite add up and is my literary pet peeve. So I bitch about it more than is warranted. It should not get in your way of this book, especially if you’re in the mood for something light and funny.

I liked that Aviva’s story starts with Rachel, her sixty-something mom, going out on a date. Rachel is sharp and really, the funniest character in the book. The opening caught me by surprise, because I knew what the book was about going in, and it delighted me to no end. I wouldn’t have minded one bit if we had stuck with Rachel throughout, she was the most genuine and believable character in the book. Ruby, Aviva’s daughter is a bit too precocious and a good chunk of her story is told through emails she sends to her Indonesian pen pal.

The book ends with Aviva, finally, telling her story in a second-person “Choose Your Own Adventure” style which works really well, all things considered. It not only allows us to see the decisions she could have made and maybe should have made, but also really wonderfully illustrates how stupid we can all be in our 20s.