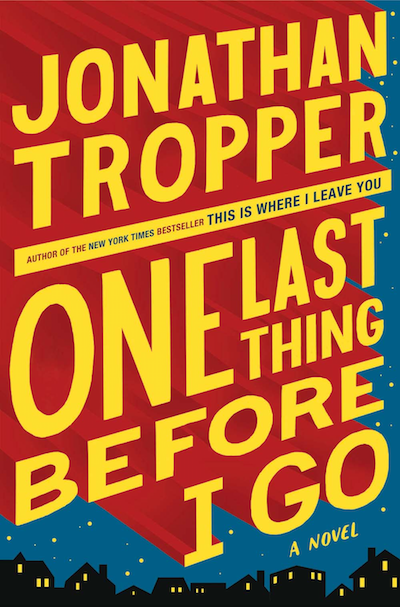 There are times when there’s a comfort to cliched material. It’s pleasantly familiar, devoid of the unexpected – like a favorite meal or well-worn sweatshirt, it holds only satisfaction, not surprise.

One Last Thing Before I Go is not one of those times.

Jonathan Tropper’s novel is so full of shopworn tropes the pages themselves practically groan. Anyone who has seen a movie, watched a sitcom, or read a novel by any of a number of middle-aged male authors currently being published doesn’t need to pick up this book. The material has been done many times already, despite not really needing to be done in the first place.

Drew Silver, the main character of “One Last Thing” is a washed-up drummer, paying rent for a dingy apartment with the diminishing royalty checks from his band’s only hit. When he finds out he’ll die if he doesn’t have a heart operation, he decides against the surgery. With his estranged ex-wife Denise about to remarry and his daughter filled with contempt for his bad parenting, he figures he doesn’t have anything to live for.

Tropper, for some reason, thinks Silver is pity-worthy, or at least relatable. I can’t come up with a single reason to agree. He’s pathetic, insensitive, incompetent, and self-absorbed.

Worse than Tropper’s sympathetic portrayal of such a sad-sack is the way he treats his female characters. Denise, the ex-wife, is spoken about like she’s an object, in some cases literally. Her looks are constantly mentioned (try as I might, I can’t patch together a mental picture of Silver, since his appearance isn’t covered nearly as much), and Silver and her fiancée talk about her like she’s a possession, sometimes in her presence. In 336 pages, maybe 10 are told from her point of view, and she spends most of them thinking about men. Casey, the teenage daughter, is an impossibly wise-cracking and sarcastic plot device. She’s here to move the book forward and deliver very improbable one-liners. I got very tired of her. Dana, a backup singer who performs with Silver at parties, goes home with him early in the book (to establish that women are attracted even to past-their-prime musicians, I guess?), appears fleetingly once more and disappears. The only woman with a trace of humanity is Lily, the café singer whom Silver admires from afar, but even she exists primarily to please him. Ugh.

There is a story to be told about middle-aged men. Like every other character demographic, they have thoughts, feelings, opinions – an internal life that’s worth writing about. Authors like Tropper just don’t seem to be the ones to tell it. They assume our allegiance is a given and so don’t do enough to earn it.