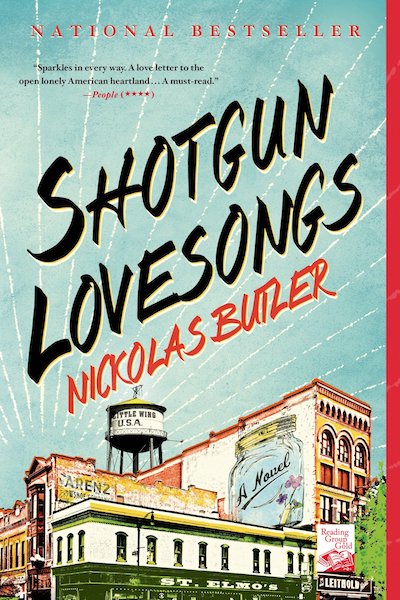 Recently, a friend pointed out on Twitter that a book he was reading would drive me bonkers because it touched upon very many of my literary pet peeves.

I chuckled because he was right, I do loathe that crap in books, and yet at the same time I was reading Shotgun Lovesongs by Nickolas Butler, which could also be described by that tweet. I kinda thought I was enjoying the book until i wasn’t, but I soldiered on because I thought something dramatic might happen. It didn’t.

This one follows the lives of four high school BFFs from Little Wing, a tiny town near Eau Claire, Wisconsin. Herny’s the do-gooder farmer who married his high school sweetheart, Beth; Ronny is the brain-damaged rodeo star who wants to escape; Kip is the asshole rich guy who did well in Chicago and came back to save the town; and Lee is the indie rockstar who made an album in a chicken coop in the middle of a cold Wisconsin winter that went on to sell a bunch of copies and nab him a Grammy.

If that last one has you tilting your head thinking, Gee, that sounds familiar, you might be interested to know Butler went to high school in Eau Claire with Justin Vernon aka Bon Iver (or bonny bear if you’re a fan of Saturday Night Live skits).

This novel is soaked in Wisconsinality (which I think was also the tagline for Heckel’s a Perkins-like restaurant in Chippewa Falls, WI), which is what made it endearing. The characters and what happens is what made it annoying. The four dudes who populate this story are supposed to be best friends, but none of them can see past their own noses to be actual friends. Maybe this is what male friendships are like?

A lot of the tension is supposed to hinge on one character wanting another one’s wife and a decade-ago dalliance that happened before marriage. It feels kind of like a sit-com trope. And even though the wife does get to have her own voice (the chapters alternate in POV from each of the main characters) she’s mostly just there to provide tension between the friends, though I do have to admit there is a small subplot of her wanting a friend of her own, because apparently she has none now, even though she lives in the town she grew up in and not many people seem to leave it.

Anyway, I put aside most of my annoyances and reservations about the book because I loved Butler’s descriptions of small-town Wisconsin life– the scenery, the people, the snow snow snow. But then at one point Henry, the farmer, decides that the reason so many men don’t have actual friends is because they cant’t trust them around their wives.

And I was all “fuuuuccckkkk that noise.” because really? Is this an actual concern with men? And do they not think their wives have any autonomy of free thought of their own? Are wives really gonna just ditch their entire lives because some other man might want them? Is that all it takes to get a woman in Butler’s Wisconsin? The mere act of male desire?

Even more puzzling was this was a thought that came from Herny, the supposed “good guy.” We’re frequently told how great a guy Henry is though we never see him actually be a great guy.

At that point I just had to keep reading because I was convinced someone was gonna die and I wanted to see who.

I liked Christa’s summation, “Ultimately, I decided it’s a nice book that won’t hurt anyone.”

She’s right it is a nice book. It won’t hurt anyone, as long as your eye-rolling muscles are in tip-top shape.