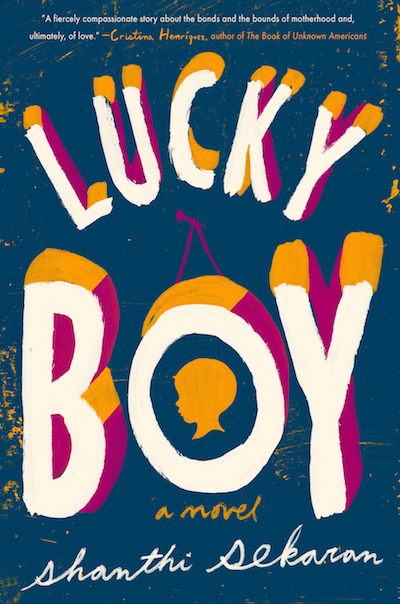 So far this year I’ve finished reading nineteen books, eighteen of them have been novels. I know we’re not even six months into 2017 and there’s still a lot of reading ahead of me. But for now, I’m totally comfortable saying Lucky Boy by Shanthi Sekaran is my favorite novel of the year so far.

Oh, how I loved this book. I loved it so much that I’m totally bummed my bookclub chose *sad trombone* White Tears over this one.

I’m never a “I didn’t want this book to end” kind of person. Mostly I think all books can be anywhere from 40 to 200 pages shorter than they are But in the case of Sekaran’s novel I would have happily bumbled about time and space with Kavya Reddy and Solimar Castro-Valdez until the sun died out or The Turnip in Chief destroyed us in a pissing match with North Korea. Either way, spending my time with these two women would have been the best use of my last days.

Solimar is a young undocumented immigrant from a small village in Mexico who took a harrowing journey across the border to join her cousin in Berkeley, California. The cousin takes one look at Soli and surmises she’s pregnant. Ugh. Soli’s story unspools around what it’s like to be in a country where you don’t speak the language, to work as a cleaning lady for rich white people, and how you handle a pregnancy when you have no insurance and no papers.

Kavya is a happily married, middle-class Indian woman who after college went into cooking. After apprenticing at the hottest pizza place in town, she takes a job as the in-house chef for a sorority. Her husband, Rishi, works for a hot Silicon Valley tech company. They seems to have the dream life, except they’re inability to conceive a child. After many failed attempts, Rishi and Kavya decide to become foster parents.

I’m sure you can figure out now how Kavya and Soli’s stories collide. It is heartbreaking and eye-opening and wonderful. Sekaran does such a great job portraying each woman that you want them both to win even though that’s impossible in this situation.

The book is brutal in its portrayal of undocumented immigrants and what Soli has to go through is devastating, but that doesn’t mean Kavya’s story isn’t just as heartbreaking, but in a different kind of way. The novel touches on class, racism, the way motherhood and parenting is viewed by these Indian and Mexican families, interracial adoption and the foster care system.

Gah! I could go on and on about how much I loved this book. The stories are beautiful, but I also learned a lot about things I had vague information about but never really thought about on a personal level. So good, this one. So good!