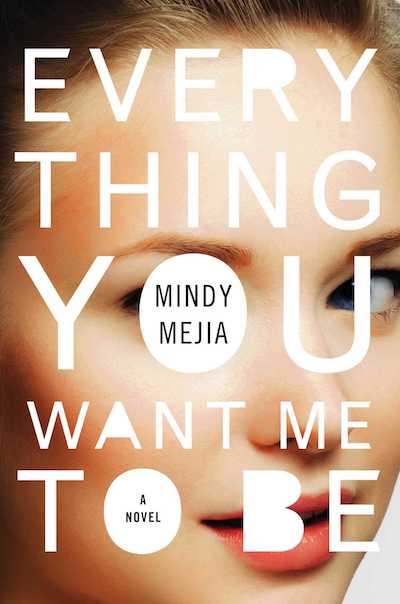 The first thing I will tell you about Mindy Mejia’s mystery Everything You Want Me to Be is that when the big reveal comes, when whodunnit is revealed, I gasped because I did not see it coming and in that respect this one totally had me in its sway.

The mystery revolves around the murder of 18-year-old Hattie Hoffman, a pretty, well-liked senior in Pine Valley, MN a tiny town near Rochester. Hattie’s killed the night of her triumphant appearance as Lady MacBeth in the high school production. There’s a few suspects and sheriff Del Goodman is going to get to the bottom of the case even though it’s especially painful for him because he was BFFs with Hattie’s dad and knew her from the time she was a little girl.

This one unfolds through the point of view of Sheriff Del, Hattie, and her English teacher, Peter.

For as much as I loved Sheriff Del, and I really loved him, I hated Peter. Peter was a jackass. The kind of guy who thinks he’s too good for a small town even though he’s the kind of stupid wanker who thinks he can pay someone to go get an autograph at a Thomas Pynchon reading.

Our heroine here, poor, dead Hattie was something of a Chimera. Good student, good daughter, good girlfriend to a rando jock guy, good BFF, but deep inside she burned with the desire to get the hell out of her Podunk town and she did some shady things that I don’t want to spoil, but that come as a shock to her family and friends.

This one is a little tough because while the mystery and Sheriff Del are aces. . . both Peter and Hattie are hard to believe as actual humans. Hattie’s just a little too. . . too. . . too cookie cutter small town girl whose a big fish in a small pond. Everyone around her feeds this weird illusion she has of herself and nobody is ever like “Hey Kid, you’re great, but you’re young and if you think you can make it in NYC with a high school diploma and a job at CVS you got another thing coming.”

I dunno. Read this one of the great mystery and Sheriff Del, they’re worth putting up with insufferable Peter and unbelievable Hattie.