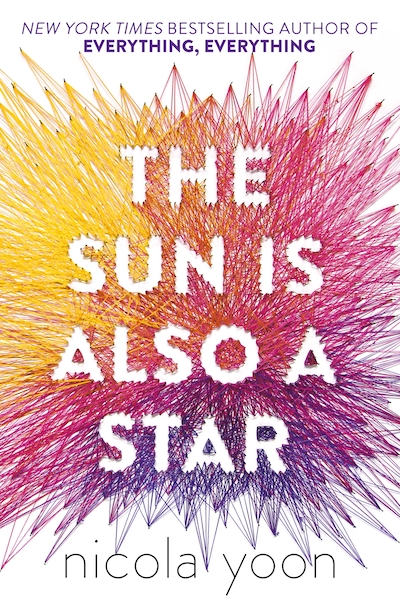 Nicola Yoon sure has a knack for writing smart, charming teenagers in unusual situations. Her prose clips along at a delightful pace and one of these days she’s going to write a book with a plot that lives up to her writing and BAM! I will be in love.

For a book that deals with weighty issues — deportation, racism, infidelity — The Sun is Also a Star is a surprisingly light read. Instead of getting a book where our main characters are really dealing with the issues at hand, we get a sweet little love story ala Nick and Norah’s Infinite Playlist.

Natasha is a Jamaican-born seventeen-year-old whose family is to be deported that night. She is wandering Manhattan biding time until her appointment with an immigration lawyer who might help her stay in the country where she’s lived for the past nine years. She is a scientist.

Daniel is a first generation Korean-American whose Korean-born parents really, really want him to become a doctor. On this fateful day Daniel is off to get a hair cut and deliver some deposits slips (or something like that) to his dad before going for an interview with a Yale alum. He is a poet.

The two meet by chance, Daniel attracted to Natasha’s giant pink headphones and the ‘Deus Ex Machina’ stitched into her jacket. After he saves her from being smooshed by a car, the two spend the day bopping around NYC getting to know each other, discussing love from a romantic and scientific point of view, and occasionally making out.

It’s all very sweet and set against the back drop of Natasha having to leave that night, something Daniel doesn’t learn until much later in the day.

Interspersed throughout the love story told alternately from Daniel and Natasha’s point of view are sidebars told by the Universe about the sun and History about the kids’ parents, and the Future.

This is a cupcake of a book. It’s light and sweet and pretty fun while you’re chewing on it, but it’s not gonna fill you up or truly satisfy you for more than the time it takes to ingest. If you’re in the mood for cheerful romance with a side-order of sort of “ripped from the headlines” issues, then this is the book for you. Don’t expect too much and you’ll be delighted. Like I said, Yoon can write a charming character like nobody’s business.

My only real grump with this was Natasha’s love of 90s grunge rock, specifically Nirvana and Soundgarden. I don’t know why young adult authors keep trying to cram 90s-tastes into today’s teens. I’m totally the type of person who believes that musical taste is a form of self-definition and a short cut to decode what type of person someone is. However, I’m unclear what it is supposed to say about a seventeen-year-old of now to really, really love the music of her parents.