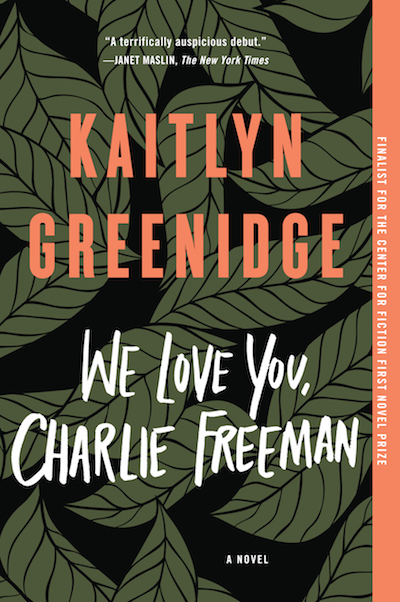 It’s 1990(ish) and 14-year-old Charlotte Freeman has recently moved from Boston to rural Massachusetts. She’s got a scrunchy in her hair, is starting a predominantly white school, and she doesn’t quite know the lyrics to the popular Bell Biv Devoe song, which is embarrassing.

Almost more embarrassing than the fact that her family packed up and move to the Toneybee Institute where they’re living with a chimpanzee named Charlie and trying to incorporate him into their family like a brother while also teaching him sign language. The Freemans all know ASL, and particularly the black vernacular of ASL, because Laurel, the mom, met a troop of black ASL performers when she was a kid and it made a lasting impact on her. Laurel’s totally into this new living arrangement and experiment in a way that the rest of the fam can’t get behind and her devotion provides a lot of the tension in the book.

While not spending time wth the Freemans as they adjust to their new living situation, we get to hang out back in 1929 and Nymphadora, a spinster teacher and Star of the Morning (some sort of religious thing that was a delight to read about), who gets involved with Dr. Gardener who runs the Toneybee at the start.

Kaitlyn Greenidge’s novel, We Love You, Charlie Freeman is a book crammed with a lot of issues — racism, family secrets, sexuality, language — without feeling too much like a book about issues. I certainly dug that. I also enjoyed reading the story from different points of view — Charlotte and Nymphadora being the main ones — but hearing from Charles (the dad) and Callie (the younger sister) was nice.

Greenidge sets up this great premise, and puts a lot at stake for the characters, however it doesn’t seem to pan out. It’s as though the book dissolves under the weight of its one weightiness. Some of the dramatic moments feel a little abrupt, revelations are just announced suddenly rather than built up. The ending is super abrupt, and while I appreciated how deftly Greenidge married the 1929 climax point with the 1990 one. Appreciated is an understatement. I loved it. Aside from Nymphadora’s storyline, it was my favorite thing in the book. However, it still felt a little hollow as an ending, though the epilogue did some of the heavy lifting when it came to providing some sort of closure.

This one is a toughy. I enjoyed reading about 2/3 of the book. The other 1/3 made left confused — especially everything surrounding Charlotte’s mom, Laurel. So many of her motivations were not clear and thus the choices she made regarding her family, Charlie, and the Toneybee were puzzling.