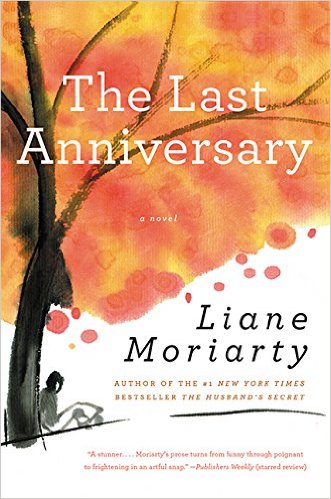 I’m slowly making my way through Liane Moriarty’s backlist as it becomes available from the library. The latest in the rotation is a cute, though somewhat predictable mystery called The Last Anniversary.

This one centers around the family that lives on Scribbly Gum Island (sadly a fictional place). They have turned the island from a desolate place not too far from Sydney into a sort of theme park centered around the mystery of the Munro Baby.

In 1932 sisters Connie and Rose found the Munro baby at a neighbor’s house. The baby was crying in her crib. Alice and Jack Munro were nowhere to be found. In fact, they were never seen from again. Connie and Rose named the girl Enigma, and sort of raised her as their own on the island.

Now, Aunt Connie has died and the entire family is in a state of flux, and, shockingly, Connie has left her house to a non-family member. In fact, she’s left the house to Sophie Honeywell a pretty, affable HR Director in Sydney who dumped Connie’s nephew moments before he was going to propose to her.

Other inhabitants of the island include Enigma and her frumpy daughter and her asshole husband; Enigma’s artist granddaughter Grace, newborn baby, and husband; and of course poor, doddering Rose.

This mystery isn’t as strong as Little Big Lies, not just because it’s easy to figure out, but because so much of the book is spent on pretty mundane topics in a way that isn’t that entertaining or thought-provoking.

The book is at its best whenever it’s dealing with Aunt Connie and her eccentricities. It lags quite a bit when it spends so much time on Sophie and her desire to get married and have a baby because she’s nearly 40. ZZzzzzzz.

However, the ending with Rose is quite nice and totally made wading through the boring domestic stuff.