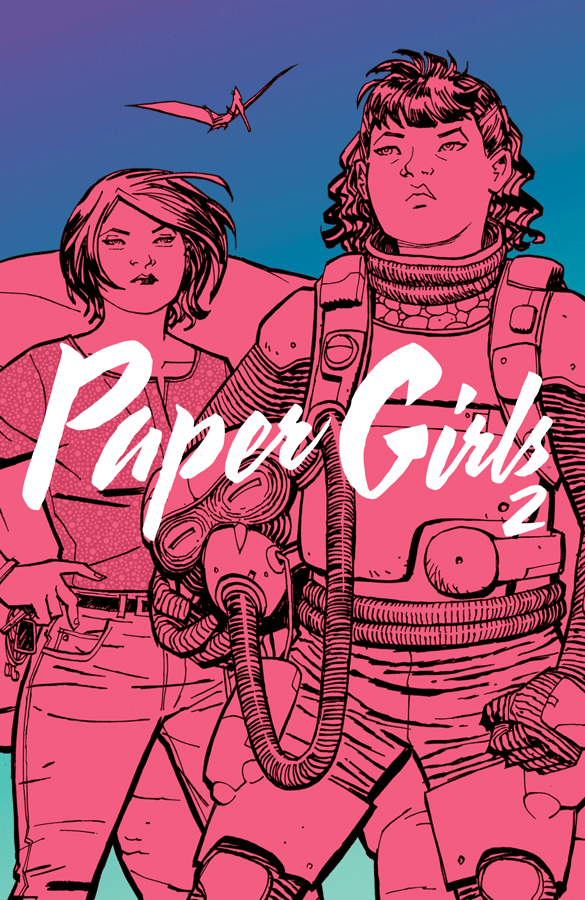 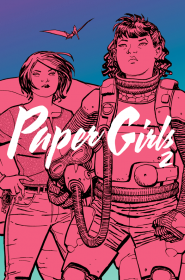 Previously I wrote about my love for Paper Girls by Brian K. Vaughan, a fabulous comic set in the late 80s following four paper delivery girls, Erin, Mac, Tiffany, and KJ. Volume two picks up right where volume one left off, with the girls (and me) being confused as to where and when they were.

I say “when” because at the end of the first volume our girls were staring at a future Erin. In this volume, we find out they have been transported to 2016 and future Erin, a 40-year-old stuck in a dead-end job, helps them try to figure out where KJ is (she disappeared at the end of volume one) and how to get back to their time and make things right.

One of the best things in this volume is the play between 1988 Erin and future Erin. 1988 Erin is confused as to the life future Erin is living and why future Erin isn’t friends with the rest of the paper girls. Future Erin is the motherly figure to 1988 Erin trying to shelter her and her friends from danger while feeling guilty that her life didn’t turn out the way 1988 Erin dreamed. They comfort and take care of each other and it’s seriously so sweet.

There is also plenty of good action in this volume, too. While trying to find out what happened to KJ, the girls run into more monsters, a third Erin who they don’t know if they can trust, and we start to see that the girls are somehow involved in an intergalactic war and a bunch of people are chasing them through time.

I honestly don’t know if intergalactic war is the right thing to call this, and I don’t know if the girls will keep jumping through time, because there is still a lot of mystery to this series, which I love, but it’s hard to explain it all. Just believe me when I say that the girls are on the run, time isn’t linear, there are some scary monsters and aliens (I think they’re aliens?) chasing them, and they are still fabulously kick ass.

This series is so delightful and I would recommend it to anyone, but definitely get this into the hands of young women.