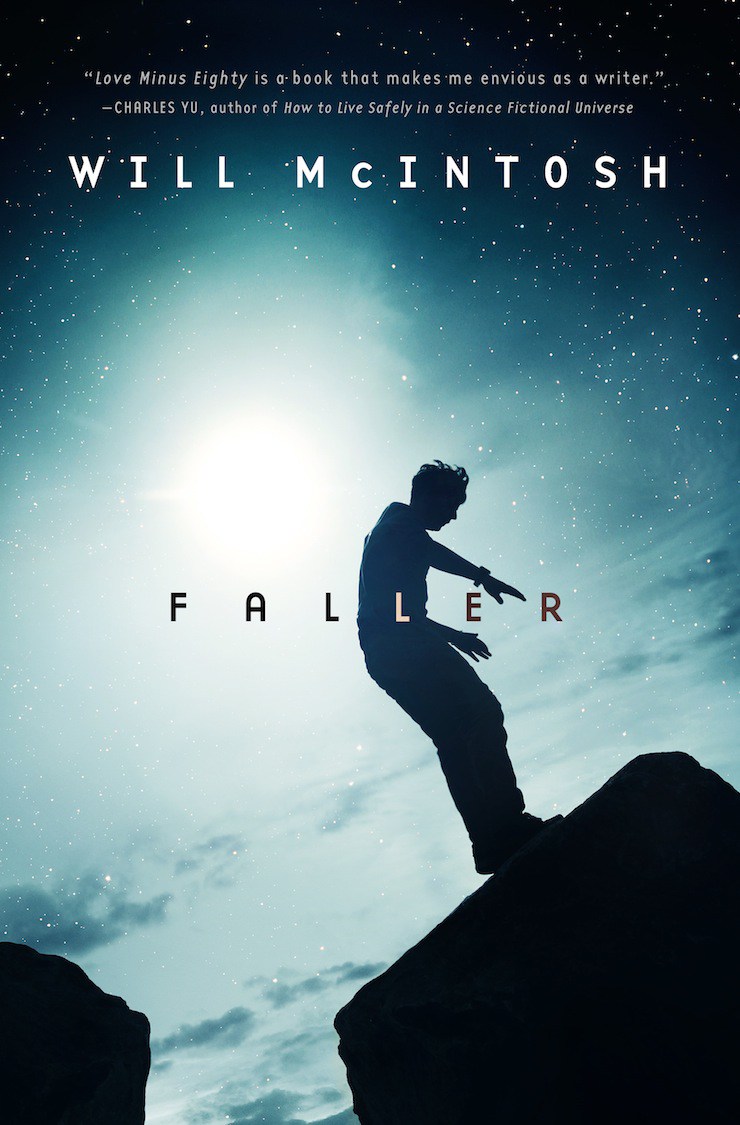 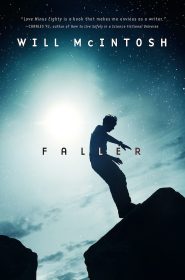 Faller by Will McIntosh is a very strange sci-fi novel. It begins fabulously, with our hero waking up not knowing where he is, his name, how to read, what the name for common things is, and what has happened. He’s completely disoriented, but so is everyone else around him. They’re all waking up in what appears to be the aftermath of a fire or a war, with crumbled streets and burning buildings surrounding them, but what’s really weird is that right in the middle of the street, the world ends. The street is cut off and all that’s left is bright blue sky. Looking down it looks like a cliff, with pipes and wires sticking out where the rest of the street used to be.

Our hero decides his name is Clue, since he hasn’t a clue who he is, but there are a few things in his pocket to try to help him: a toy soldier with a parachute attached to it, a picture of him with a woman, and a piece of paper with circles and a flag on it, drawn in blood. Clue tries to figure out what these things mean, along with the help of a few people he befriends, and one thing he assumes is that the toy soldier with the parachute is him. He makes a parachute, changes his name to Faller, and attempts to fly off a skyscraper, but he doesn’t attach the parachute correctly and ends up flying off the end of the world. This is where things get strange.

The novel then jumps to a guy named Peter, his relationship with his wife and his in-laws, and his scientific experiments. Chapters then go back and forth between Faller and Peter, with Peter’s chapters slowing things down considerably. I couldn’t help but be bored with relationship troubles when Faller is literally falling through the sky for days at a time. It all makes sense in the end, and Peter’s chapters get better, but I was underwhelmed with them for half the book.

But it’s not just the entrance of Peter that makes this strange. Faller falls through the skies for days until he sees land. Thus begins the journey of Faller jumping from island to island, finding more people who don’t remember the past, and trying to figure out what that flag on his paper is pointing to and why. It’s really outlandish to think that someone can just fall through the sky for days on end and land perfectly on a piece of land, but I decided to go with and accept that in this world things like this are possible.

This novel is odd, and I still haven’t decided if I like it or love it, but I did enjoy it. Will McIntosh is really good building tension and coming up with something completely unusual and refreshing, so I have to give him some props for that. I haven’t read anything like this before.