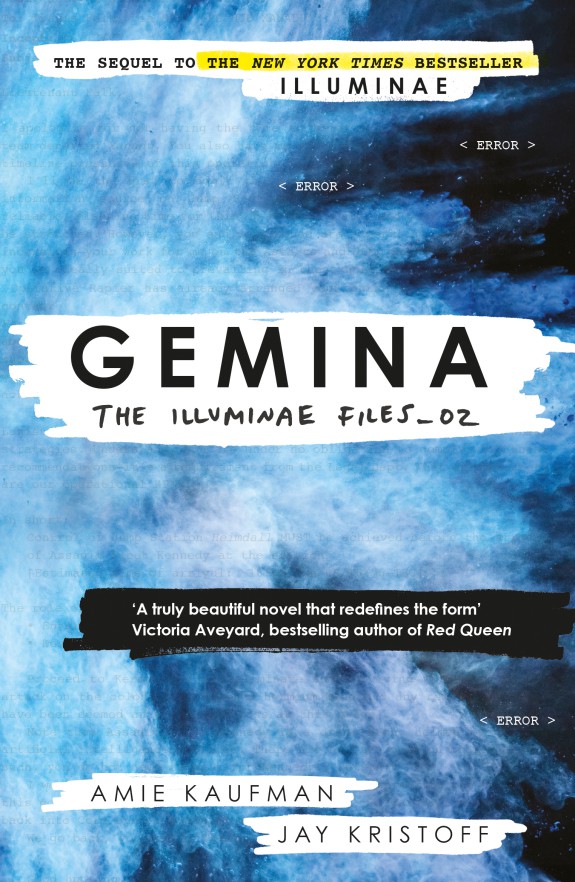 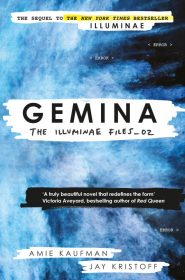 I loved Illuminae, Amie Kaufman & Jay Kristoff’s young adult sci-fi novel about a group of people escaping an attack on their planet and trying to make their way to a safe spot, the Jump Station Heimdall.

In Gemina, the second book in the Illuminae series, we follow new characters who live at the Heimdall station: Hanna, the artistic station captain’s daughter, and Nik, the resident bad boy drug dealer from a mob family. Nik is crushing on Hanna, but Hanna’s got a hot boyfriend who works with her dad, though it doesn’t stop her from mercilessly flirting with Nik. But Hanna and Nik’s flirting is put on hold when BeiTech (the bad guys from book one) invade Heimdall station.

Told in the same epistolary style as Illuminae, we learn about the Heimdal invasion through chat transcripts, emails, video surveillance footage transcripts, court records, and Hanna’s illustrated journal entries, and I loved this. I was a little sad that this book didn’t include the same characters as book one, but it took literally ten pages for me to stop pouting and jump on board with Hanna and Nik.

Hanna is a bit spoiled and pretentious, worried more about getting a new outfit and drugs for a big yearly party at Heimdall, but she’s also feisty. Her father trained her to fight and resist, so while she starts off as somewhat spoiled, it doesn’t take long for her to get her hands dirty when Heimdall is attacked.

Nik was born into a crime family, but he’s not necessarily jazzed about it. Sure, he’ll sell drugs to spoiled station kids, but he’s not keen on everything his family does. He has a fun, flirty relationship with Hanna, but my favorite interactions with Nik involved him talking to his wheelchair-bound cousin Ella, a fantastic hacker smartass who helps the fight via her computer skills.

While the attack on Heimdall takes up most of this book, there are also complications related to those drugs that Nik sells. This is where things get weird. The drugs are made from the larvae of these awful maggot-like creatures that need to be shot into cattle and then harvested before they grow large and become menaces. It’s explained way better in the book, but as you can imagine these creatures are overlooked when Heimdall is attacked and this side story causes all sorts of issues.

I could’ve done without the maggot-like side story, even though I thought it was a very clever way of introducing how drugs were made in space. But with or without these maggots, I absolutely loved this book. I have the same energy and excitement as I did reading Illuminae, but I may like this one even more because of the addition of Hanna’s illustrated journal entries. The illustrations are by Marie Lu, author of the Legend series, and they add so much to the story. Through the illustrations it’s easier to imagine Heimdall, the living quarters, the wormhole, and some of Hanna’s motivations. The illustrations don’t make the book, the rest of the story is strong, too, but I love their addition.

These books are just so cool. I recommend them to anyone wanting to read an action-packed, fun, sci-fi story.