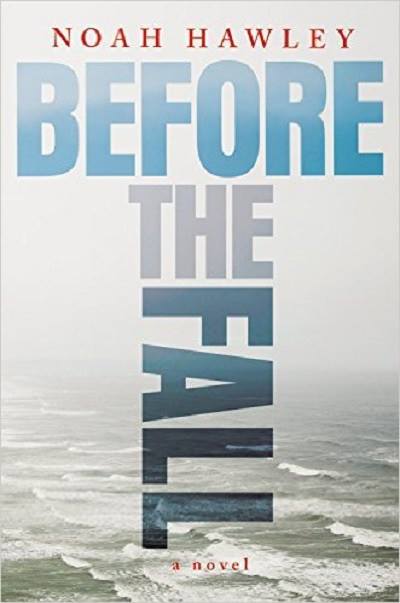 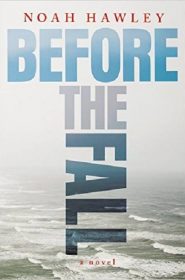 There are two great, gripping scenes in Noah Hawley’s novel Before the Fall. I’ll tell you about the first, but not the second. The second offers the story’s only startling, intake of breath moment, and I won’t dash that for book hounds interested in how the “Fargo” TV series creator crafts his suspense in book form.

The first moment, though, is enough to suck you in long enough to get to the second. After that, I won’t lie, everything peters out to a pretty snoozy finale.

It all starts with a private planeload of people, including a soon-to-be-fallen financial whiz and his wife, the money magnet head of a Fox News-ish television station, his rags-to-riches wife, their sleeping son and iPod shuffling daughter, an un-discovered visual artist and various pilots, crew, and a bodyguard leave Martha’s Vineyard en route for New York City. The flight lasts minutes before the plane nose dives straight into the Atlantic Ocean, killing almost everyone. Except. Scott Burroughs, an artist who paints, ironically enough, disaster scenes, makes it out alive — probably because he dove beneath his seat in search of the pencil he dropped while sketching another passenger.

So there he is, treading water, trying to figure out all the what-thes, when he hears little J.J. Bateman crying. Another survivor. He finds the 4-year-old clutching a floatation device.

And then they’re off, making what will ultimately be an 8-mile swim to shore, helped along by the stars as a map and a memory of the time a young Burroughs watched Jack Lalanne tow a boat, which in turn inspired him to become a great swimmer. Lucky enough.

That swim scene is tense, man. The distance. The waves. The shark potential. The kid on his back and the accidental moments of good luck. Your calf muscles will sympathy cramp.

Back ashore, the story isn’t so black and white — thanks to Mr. Not-Fox New’s colleague, a dirtbag conspiracy theorist who gives Burroughs the A-List Tabloid treatment, scrutinizing his every move, every association, every piece of disaster art and making wild accusations about his life before and after the crash. He’s got a hunch that the plane crash wasn’t accidental and he’s looking for someone to pin it on.

Hawley takes the plane crash players back in time and offers up individual stories — sometimes including just the trace of a compelling reason for the passenger to have been personally involved in the crash. Some of these are interesting. Some are just shy of it. One has an indictment on the horizon. Another has juice on a high-power coworker.  The wives are mostly innocents, just poorly flushed out levels of dissatisfied.

In all, Hawley’s novel is like one of those DIY Agatha Christie murder mysteries where everyone is trapped in the same room and pointing fingers at each other. They’ve all got a reason to crash the plane. Some better than others. Hawley just had to Choose-His-Own-Adventure to write the final chapters. And he was wrong. What actually happened is a pretty big bummer, compared to all of the might-have-beens.

Mostly this feels like Hawley wanted to have a poke at Fox News, which is pretty understandable. But none of the rest of it feels very complete or satisfying.