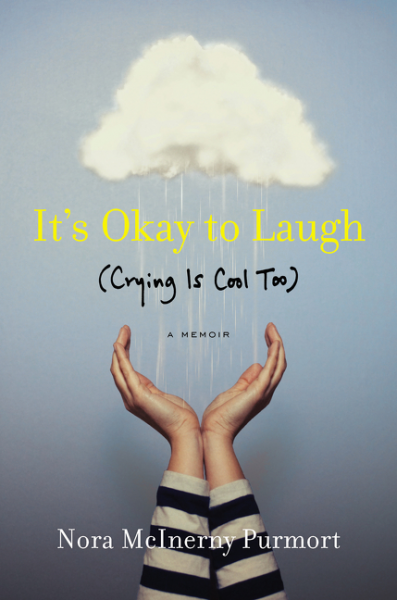 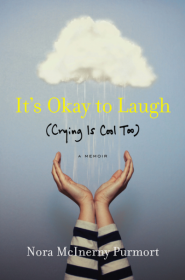 I tend to avoid essay collections/memoirs by bloggers. This is a little strange, considering I’m an aspiring author with a blog that will be 16 years old this month. But a lot of times when I see a blogger get a book deal I shrug and think “Meh.” To be fair, ninety-nine percent of the time the book-deal-getting blogger is someone I’ve never read before. I figure if their blog doesn’t interest me, reading it in book form isn’t going to do much for me either.

However, for the first time that I can remember, a blogger I actually read released a book. It’s Nora McInerny Purmort’s It’s Okay to Laugh (Crying is Cool Too), and I gobbled the book up in less than twenty-four hours and enjoyed it immensely, even when I was a little annoyed by the writing.

Since I already bragged about my blog, I just want to say that I discovered Nora’s writing through her sister, Meghan, who was one of handful of women bloggers in Minnesota back at the turn of the century. Though Meghan has long since given up personal blogging, we’ve been social media friends for years. She is delightful and so is her sister.

Before I get into it I have to admit from the get go whenever Nora talked about being super tall, I rolled my eyes hard. Why? Because I am an asshole. A six-foot-five-inch asshole who doesn’t think anyone gets to claim “tall” until they are at least 6’4″. HOWEVER, I did cackle with complete glee when she talked about how dudes have zero idea how tall they are. Because she is so right. I’ve often claimed I never met a man who was under six-feet tall, which at varying times makes me anywhere from 6’8″ to 7’3″. Seriously men, we’re on to you.

But so, back to Nora. Her story is a heartbreaker. Did you read My Husband’s Tumor? You should have. Hell, you still can. I think most of the Twin Cities were captivated by Nora and Aaron’s love story. I know I was. I watched the live-stream of their wedding like a good, creepy internet person. I also, sadly, watched Aaron’s funeral internet and still get goosebumps when I remember Nora eulogizing her husband and how the nurses were talking about his heart.

If you don’t know the story. Girl meets boy. Boy gets brain tumor. They get married, have a baby, tumor worsens, there’s a miscarriage of a second baby, father dies (Nora’s dad, was also an author and he answered the 6 questions we always ask a few years ago), boy dies, everyone cries for 100 years, because how does any one person handle so much loss in a matter of weeks?

If nothing else, Nora is resilience personified.

The book chronicles Nora’s life before, during, and after Aaron. She writes about falling in love, being a couple, and coping with cancer. She writes about her family, how she got to know her siblings in a new way after losing their dad and how they helped her while Aaron died. She writes about high school and college, and all the jackass mistakes we make in our twenties. She writes about grief and anger and trying to get through the swamp of that. She’s self-deprecating and funny throughout, but also sincere. It never felt like she was hiding behind humor, which was refreshing.

I’m not sure if they’re calling this a memoir or essays, I choose essays because there’s not a strong linear narrative throughout. It’s kind of jumpy and and it reads a lot like her Tumblr blog — short essays interspersed with lists. This book is big on personality and if you don’t care for hers, this isn’t the book for you. I find her utterly charming and was charmed by the book, even when the repetition got a little exasperating. There are way too many mentions of the lime green Beetle her mom drove, the retainer she wears, her love of the Real Housewives, and a few other things where her phrasing is nearly identical every time she mentions them. Though, to be fair, the repetitive nature probably stood out more because I read the book in a day. Nora is an engaging writer and once I started reading I didn’t want to do anything else, which is really the highest praise I can give a book.