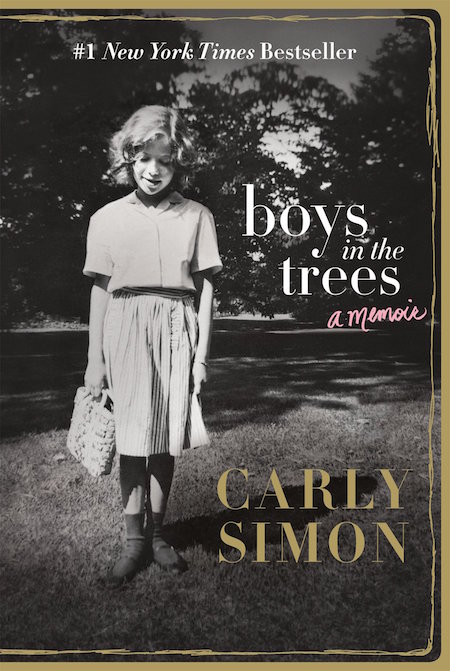 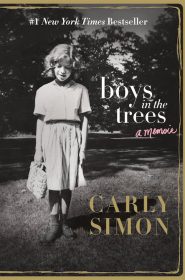 I have a strange compulsion to read all the memoirs written by women in music. I’m not exactly sure when it started. Maybe as a sort of research for my own book-in-progress. Maybe it’s because I love rock & roll and want to know more about the women who make it. Maybe I am slowly turning into my mom and instead of memoirs by 40s & 50s hollywood actresses, my drug of choice is women in rock.

So of course when I stumbled across Carly Simon’s memoir on audible with a credit burning a hole in my pocket, I downloaded Boys in the Trees quicker than you can say “anticipation.”

First, let me get this out of the way — even though the book is read by Simon I would not recommend the audio version. Throughout there is music played behind her narration at a volume that make it hard to understand her. It was super frustrating and it never stopped annoying me.

This is kind of shame, because Simon’s memoir was surprisingly delightful. I had very little Carly information going in: “You’re So Vain,” James Taylor, and her father co-founded Simon & Schuster (yeah, that famous publishing house).

The memoir starts with her childhood growing up the ugly duckling with two beautiful sisters and a younger brother. She was named Carly because her parents were keen on having a boy and had picked out the name Carl. She tells tales of dinner parties at their home with guests like Jackie Robinson and Benny Goodman; summers in the Hamptons; and all those kinds of things you hear about wealthy New Yorkers doing. Of course it’s not all grand, Mummy moves her nineteen-year-old lover into the house ostensibly as a tutor for Simon’s brother Peter, Daddy is a depressed alcoholic who is being pushed out of his business and dies when Simon is sixteen.

As for Simon she has a stutter, bad hair, and struggles with depression, which she calls The Beast.

She starts singing with her sister as a way to fight the stutter, and eventually drops out of Sarah Lawrence to focus on singing. She bounces around Europe with a boyfriend for awhile. She spends a lot of money on therapy, and mentions being kind of broke, but never does an actual job appear.

Eventually she gets signed, gets famous, and things get really good. Carly is totally the kind to kiss and tell and it is so fun to read, especially her thing with Mick Jagger. I loved the thing with Mick Jagger, which was more flirtation than affair. She was already with James Taylor at this point and he was married to Bianca, but that didn’t stop him from sending a dozen red roses to every hotel she stayed at with James while on some tour. It also didn’t stop Bianca from calling Taylor on the eve of their wedding to tell him Carly and Mick were carrying on.

Then there is the relationship with Taylor, which isn’t all that great, but you can tell she still has a deep love for him even though they’ve been divorced for more than thirty years.

This one is a good’un with just enough dirt and emotion to keep you going and none of the boring stuff about hour boring touring is.