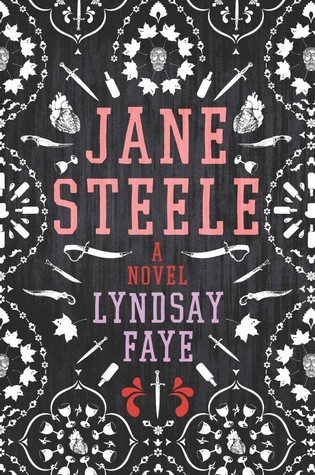 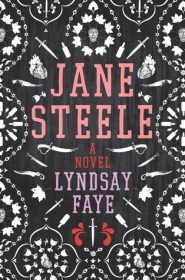 Jane Steele by Lyndsay Faye is being called a retelling of Jane Eyre, and in this retelling Jane is a serial killer. But I don’t think either of these things is completely true.

In Jane Steele we follow the Jane from the title. She has read and is a fan of Jane Eyre. Looking back on her life she makes comparisons between herself and Jane Eyre, quoting the book throughout the story. I don’t expect quoting in a retelling, so I wouldn’t call it that, but there certainly are similarities in their lives: dead parents, bad relatives, horrid girl’s school, becoming a governess, and falling in love. But that’s really where the comparisons end, because Jane Steele’s life has a lot more blood in it than Jane Eyre’s.

Jane Steele is being dubbed a serial killer, and even though she kills multiple people, I wouldn’t call her a serial killer. I tend to think of serial killers as those who have psychological issues and derive pleasure from and seek out killing. Jane Steele does none of those things. Her murders seem quite justified, almost always during some sort of dire situation, beginning with a horrible cousin who was trying to rape her. I wasn’t sad when that punk died and all the subsequent murders didn’t make me sad either, but a serial killer? Jane isn’t happy or deriving pleasure from the murders. She’s more often placed in a situation where that was really her only option.

However people want to define this novel is up to them, but for me, this wasn’t really a retelling and Jane Steele isn’t a serial killer, but she is certainly interesting, at least in the first half of the book. I loved the first half, from when Jane was young and through her time at the girl’s school where she falls in love with another student. The story hit a great stride at the girl’s school with some interesting characters, injustices around every corner, and a completely satisfying end to Jane’s time at the school. But the interest and intrigue that is built up at the girl’s school doesn’t continue through the second half of the book.

In the second half of the book Jane becomes a governess and interacts with the Mr. Rochester of this tale, Mr. Thornfield. With the introduction of the romance (that’s nowhere near as good as the romance Jane had at the girl’s school), the story slows. There are long passages of Jane with the child, some slow-building flirty dialogue between her and Mr. Thornfield, and a dull mystery involving an old trunk. The first half of Jane Steele flew by, but the second half lost all the momentum and dragged on far too long.

At the beginning of this story I was ready to declare that Jane Steele was far more entertaining than Jane Eyre, but the second half felt like a different book. Slow, drawn-out, and dialogue-heavy, the thrill from the beginning is almost gone by the end.