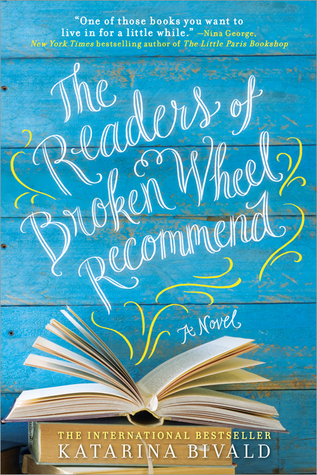 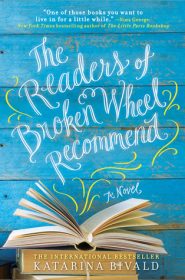 The Readers of Broken Wheel Recommend by Katarina Bivald is a sweet, small town story filled with secrets, romance, and a bunch of books.

Sara, a young, twenty-something bookseller from Sweden, has been carrying on a correspondence with Amy, an old, retired woman from a small town in Iowa, for years. Their correspondence started when one sold a book to the other and they have been writing letters to each other ever since, letters filled with book love, but also about themselves and their family and friends. Amy invites Sara to take a vacation in Iowa, but right from the beginning it’s not as she thought it would be. When she arrives she learns that Amy has passed away, but the small town of Broken Wheel knew all about Sara and convince her to stay because that’s what Amy would’ve wanted.

Sara does stay and what happens during her time in Broken Wheel is the stuff sweet stories are made of. She meets quirky small town folks, like an ornery woman who runs the diner, a recovering alcoholic who drives her everywhere, a gay couple who run the bar, a woman who controls everything in the town, and Amy’s hot twenty-something nephew, Tom. All these other characters have side stories of their own, my favorite being the romance that happens with the woman who controls everything. But Sara has a little romance of her own forced on her by the town. They love her and want her to stay so they do everything they can to hook her and Tom up.

But it’s more than the characters. One of the cutest things in the story is that Sara takes all of Amy’s books and opens up a bookstore in this small, rundown town. Neighboring towns are surprised that little Broken Wheel has a bookstore, so the residents of Broken Wheel do some pretty adorable things to try to appear very bookish to outsiders.

This was just a syrupy sweet delight. For readers who like stories by Fannie Flagg, this is right up your alley, and Fannie Flagg’s Fried Green Tomatoes at the Whistle Stop Cafe makes an appearance. Many books make an appearance because this is also an ode to book lovers everywhere. Authors, characters, and book series are discussed throughout, both when Sara’s recommending books from the bookstore and when she’s imagining her life in books and the people around her. There’s not a lot of diverse books discussed, though, which is a bummer, but gay erotica does make an appearance.

Overall, this is just a cute book. Don’t expect hardcore romance, because the romance is very light, and don’t expect extreme drama, because that’s light, too. But if you want something light, this is perfect.