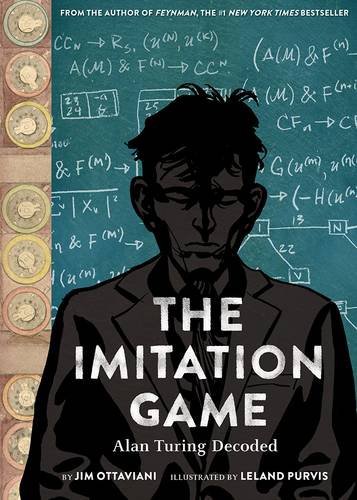 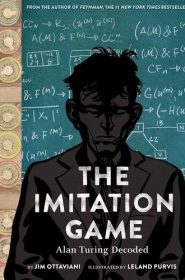 I recently watched the movie “The Imitation Game,” and it’s a great movie, even if it’s not very accurate. For instance, did Alan Turing name his decoding computer Christopher after a childhood friend he crushed on? Nope. Did Joan enter Bletchley Park after solving Turing’s crossword puzzle? Another big nope. How about Turing proposing to Joan so she could stay at Bletchley? No again. They were engaged, sure, but that’s not why or how it happened. And did Turing know the Soviet spy at Bletchley? Another no-no. It’s still a great movie, but there’s a lot of Hollywood shine added to it.

I say all of this to tell you that if you want to know the true story of Turing and his computer (named Bombe), then you might want to start with the graphic nonfiction The Imitation Game: Alan Turing Decoded by Jim Ottaviani. It will give you the facts, but what it doesn’t give you as well as the movie is the heart.

In the graphic nonfiction, Ottaviani tells Turing’s story in an interesting way: through interviews by those around him and stories showing him from when he was young up to his death. I found the unique way the interviews with his mother, Joan, and friends are juxtaposed with graphic depictions of Turing. The interviewees are shown talking about Turing and then the story moves into panels featuring Turing at work. I loved the clever way this was structured.

And even though I found the way the story was structured to be interesting, there are definite bumpy parts to it. At times the story moved quickly from one thing to the next without a good transition. It was a little jarring and occasionally confusing to figure out where we were and what was happening. It wasn’t hard to get back into the story, but it slowed me down a bit.

But my biggest issue with this story is its lack of heart. One reason I probably feel this way is because the movie was filled with heart, but this story is mostly about the facts and I wasn’t drawn into like I had hoped. I think I wanted more sadness from his mother or more compassion from Joan or more interactions with Turing being vulnerable with anyone. He appears very stoic and removed from the world around him. Maybe this was his personality, but if that’s the case, it didn’t come across strongly enough for me to buy into his reactions in certain situations, or rather his lack of reactions.

The Imitation Game graphic nonfiction is a good introduction to the true story of Alan Turing, but don’t let it be the only thing you use to get to know the man.