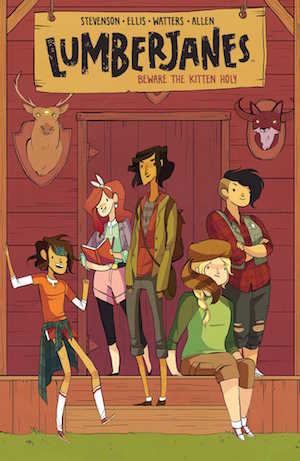 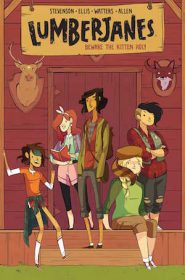 I wish I had the Lumberjanes when I was young. Following five girls – Jo, April, Molly, Mal, and Ripley – at Miss Quinzella Thiskwin Penniquiqul Thistle Crumpet’s Camp for Hardcore Lady-Types, Lumberjanes is a female-centric, girl-power, fantasy romp that is so much fun it’s ridiculous.

At camp, the girls continually sneak out of their cabin, and away from their uptight scout leader Jen, to have adventures in the nearby forest. They save each other from three-eyed foxes, a river monster, an arm-wrestling statue, and zombie-like boy campers, and they use their wits to solve anagrams and math puzzles along the way.

What’s so great about this comic isn’t really the adventures they have, but how smart they are, how they interact with each other, and all of their personalities. Jo is the analytical, math-savvy girl who feels like the mother of the group. April is the most girly, loves puns, and is the strongest of the bunch. Molly is the archer of the group and she has a crush on Mal. Mal is the punk rock, plan creator, even if her plans are sometimes ignored. And Ripley, who appears to be the youngest with her childish personality, is really energetic, loves animals, and she makes the best fastball special. These girls are supportive of each other, relatable, and brave.

But the girl power extends beyond how great these girls are. There are also phrases they use all the time that invoke amazing women throughout history. They are constantly saying things like, “What in the Joan Jett are you doing?” or “Where the Phillis Wheatley were you?” They mention so many women and I had to look some of them up because I had no idea who they were. This is a good thing, because I’m betting a lot of young girls won’t know who they are either and will also look them up. Yay for women’s history!

Another great thing about Lumberjanes is that sexuality and gender doesn’t always follow the norm and yet it’s treated as normal. As it should be. Molly has a crush on Mal and it’s adorable and just part of the story. There isn’t a big discussion about it, there’s no conflict, there’s no bullying, there’s no dramatic coming out story, it’s just like any other sort of relationship would play out. This treatment of LGBTQ characters as fully developed human beings who have crushes just like anyone else is so great. The other girls tease them and cheer them on and it’s a very chill attitude about gender and sexuality and it’s wonderful. What a great group of characters young girls can look up to.

I’ve read the first two volumes of the comic, Lumberjanes: Beware the Kitten Holy and Lumberjanes: Friendship to the Max, and I can’t wait for future volumes. I also read that the creators, Shannon Watters, Grace Ellis, and Noelle Stevenson, had envisioned the comic to be an 8-part series but that it’s been so well received it is, as of now, an on-going comic. I hope it continues for a long time.