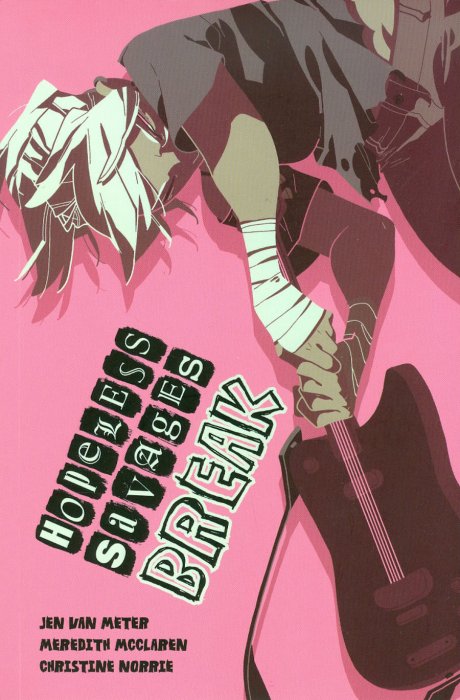 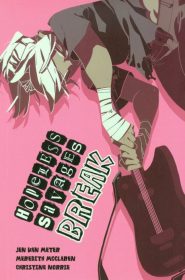 It’s been a long time since I got spend time with the Hopeless-Savage family. To refresh your memory this is the family of former punk rock superstars Dirk Hopeless and Niki Savage and their kids – Rat, Arsenal, twitch, and Zero.

This latest installment meets the family a little further down life’s road. Zero’s in college, and not doing so well, about to embark on a small tour with her band The Dusted Bunnies. Rat’s avoiding the fam again, Arsenal is a new parent, Twitch is in a shitty contract with like the Ice Capades, Dirk is helping an ailing friend, and Nikki is in the midst of a comeback tour.

The main story here is about Zero and her band. While they’re on the road they meet up with another band who is consistently stealing The Dusted Bunnies’ thunder. There’s a little bit of mystery about what’s going on, and to be honest, it’s not very fulfilling. Mostly this plotline left me thinking, “huh? What?”

But woven into Zero’s hapless band & boyfriend story are short glimpses into the rest of the family’s life, and this is all solid gold. Twitch and his boyfriend are trying to get out of their draconian Ice Capades contract in ever increasingly stupid and hilarious ways. Arsenal and her husband are dealing with newborn twins that they can’t seem to find a name for. Dirk’s got a rather poignant storyline about a sick friend. The family stuff is all good, the flashbacks in their stories make me want to hug the whole lot of them, and if it weren’t for this stuff the one would have been kind of a bummer.

I love Zero, she’s a great character, but her plot here is just not that good, and the art is kind of confusing. There were pages where I had to really study what was going on because I couldn’t tell Zero from the band’s manager, Tiffany.

Things get a little neat and bow-like toward the end, which I will forgive, because all that family stuff is so good and it was nice to spend some time with my favorite punk rockers again.