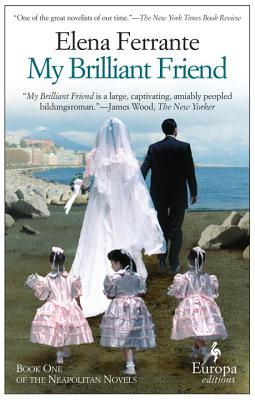 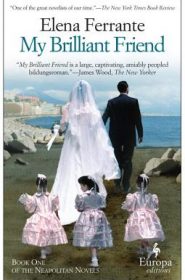 And there, languishing in my DNF folder on my Kindle, was what certainly would have been my Best Book of 2015, though only probably second-best book of 2014. (Dept. of Speculation, thanks for asking): My Brilliant Friend by Elena Ferrante is a coming-of-age story about two friend-rivals, narrator Elena and Lena, who is more likely to stab someone and/or ace a Latin exam, growing up in a small, poor Naples, Italy neighborhood in the mid part of the last century.

The girls take their friendship from simply parallel play to epic levels of loyalty when they band together for a bit of bravery that, in suburban U.S. neighborhoods, could be likened to knocking on the door of the known neighborhood witch’s house. From there it’s these dueling smart chicks against a world of competitive school mates, rich neighborhood rapists, parents who find more value in the immediate and mediocrity than in the schooling of young women. There are men, there are tests, there are the things they keep from each other — like what Elena is doing with her boyfriend, hijinks more advanced than her engaged best friend. There are summer-length growth spurts where acne dries and skin tans. There are dreams of writing, shoemaking, linguistic studies, love.

Other local dramas play out in the background, including a lovelorn woman bent on her married neighbor, a would-be poet whose response to his wife’s probable ultimatum is to move. There is much to-do over a fancy schmancy car and hot headed, incredibly violent men. Spoiler alert: Lena’s father throws her out of a window at one point.

My Brilliant Friend is told in chapter-length episodes as the girls’ lives tangle and don’t. They wind their way into their teen years, becoming who they will eventually be (characters who continue to form, I’m guessing, in books No. 2-No. 4 of the Neapolitan Novels).

So why the Did Not Finish folder? Good Q. I’m guessing it had to do with the snippets of story style, the tens of supporting characters, the way it reads like cruising over speed bumps more than climbing a hill and settling into a free fall. I can no better answer the What Stalled Me question than can I answer the What’s So Big About This Book question. It just is. It just really is.

Regardless, this book was misshelved. The wrong has been righted. It’s worth reading if, for nothing else, the final two paragraphs.