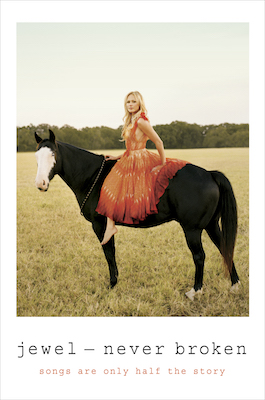 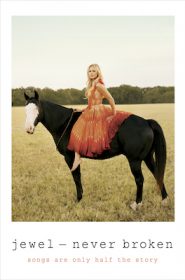 I have zero doubt that I spent large swaths of time in 1995 driving around in my 1979 Chrysler Newport singing along to “Who Will Save Your Soul” with as much sincerity and passion as 23-year-old me could muster. It might have been You Were Meant for Me”. Chances are it was both of them.

Jewel was probably one of the driving reasons I attended Lilith Fair back in 1997. I was a fan. However, back when I turned 40 I decided to go back through all the things I loved at certain points of my life and see how they held up. Jewel did not fare well.

That did not stop me from reading her memoir/self-help book Never Broken: Songs Are Only Half the Story. Because of course I did. Actually, I listened to this one, read by the author herself. I mention this only because sprinkled throughout this book are song lyrics. In the audiobook version Jewel reads the lyrics, then sings them acappella. It is awkward. Every time she did this in the audiobook my insides quaked with embarrassment for her. It felt a little like when you were at a party and one of the theatre kids got all carried away with some dramatic accent or just burst into some showtune right there next to the keg while everyone else was content listening to “Closer to Fine” again.

I will say this, Jewel’s story is pretty interested and had she stuck to telling it, I’d have dug this one much more than I did. However, there’s a crapton of psychobabble, self-help bullshit that really weighs this one down. And it only serves to make Jewel appear as someone who is wholly unaware of her privilege.

She grew up very poor in Alaska with her brothers and a set of parents who were ill-equipped at parenting. She spent a lot of her youth performing with her dad and moving around Alaska quite a bit. There are tales of no indoor plumbing and the cold, cold Alaska wilderness; walking to school in subzero temps and fighting with her brothers; longing for her artist mom and developing a little kleptomania habit.

Jewel’s story is interesting in the same way all people who have really fucked up parents stories are interesting. And make no mistake, Jewel’s mom is a selfish super villain who stole millions of dollars from her own daughter. It’s super sad the way she manipulated her daughter.

And yet, despite that, Jewel still comes of as kind of annoying and a little oblivious.

The self-help nonsense included in the memoir is grating and makes Jewel seem wholly unaware of the privilege she has and had despite growing up in poverty. Sure, she had it rough and lived in her car for awhile. But she was a beautiful white woman who could get away with hounding coffee shop owners for gigs and band dudes for advice. She jetted off to Italy with her boyfriend, Sean Penn (ugh, he is the worst) and recorded at Neil Young’s ranch. So some of the ‘woe is me’ stuff is a little hard to swallow.

Plus, she was a megarich superstar by the time she was like 22. So taking life advice from someone who was all ‘then I took a year off to discover my creative center and focus on my relationship’ is, well, come on. . . I would venture to guess it’s a lot easier to recover from emotional upsets when you have nothing but time and money at your disposal. Had she stuck to her story and her experiences, this one would have ranked a lot higher on my list, but the oddly arrogant feel of the self-help bullshit kind of left a bad taste in my brain.