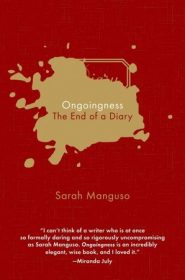 Here are the circumstances of reading Sarah Manguso’s Ongoingness: I am in a mega-reading rut. Nothing looks good. Everything takes too long. I’m tired of buying new books, but I’ve already read at least half of all of the olds. I finished a graphic novel and had to use Wikipedia like Cliff Notes to get a sense of what had happened. I sent a friend an email to ask what she was reading. Seemed like we would have similar taste, but different enough to not end up with a recommendation that I was already ignoring on a bookshelf.

This is what she recommended; I finished it in two sittings. (It’s like a 100 pages, I’m no hero.)

“The diary was my defence against waking up at the end of my life and realizing I’d missed it,” Manguso writes in what is essentially a love-hate letter to the on-going 800,000-ish word collection of memories.

I can get behind that. I’ve been a journaler. High school me had notebooks teeming with the minutia of whose eye contact was held for how long. Thirty-something me put it all online, though the minutia was drinks drank and gas station burritos consumed. The idea of journals continues to plague me. I like reading them. I like reading about them. Heidi Julavits’ The Folded Clock was one of my favorite things to read last year. And I still have an unrealized Art-with-a-Big-A project I’d like to do myself involving my own journal (which in 2016 ceases to exist). So.

In Manguso’s case, Ongoingness truly is: Let me tell you about what it feels like to keep a living record of everything that happens, without actually hearing much of the detail behind what has happened. I suppose that exists in her other books. I’ve just read one. The Guardians: An Elegy for a Friend is about a once-close friend who walked out of a hospital, did whatever for 10 hours, then threw himself in front of a train. I gave it two stars in 2012 and accused Manguso of being a Vaguebooker.

This might be her signature. Ongoingness is the same, though it doesn’t suffer from it. Whereas diaries tend to be places of confession, the ode-to-the-diary-and-remembering has spare biographical deets: She’s kept a diary for many years. Occasionally someone has read it on the sly, but she gives no shits. She has a son who was born around the time her mother-in-law was dying. It is, otherwise, sentences like: “To write a diary is to make a series of choices about what to omit, what to forget. A memorable sandwich, an unmemorable flight of stairs” and a confession “Though I try to log only the first time that he does yet another extraordinary thing, the diary is now mostly about my son.”

So this was good. I liked it. It’s an unconventional pick. I’ve come around to Manguso’s style, though nosy me would like more grit, and I’m really curious enough to re-read her last book to see if my 2012 brain didn’t sync with what she was doing in a way that it might today. This also got me a bit revved about writing again, which good art does, I guess, huh. So, thanks, friend.