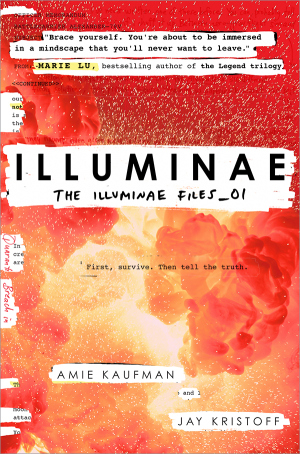 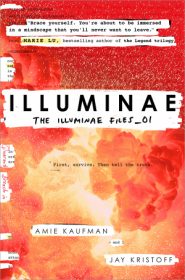 I absolutely love well done epistolary novels, those told through letters, reports, chat transcripts, newspaper clippings, etc. Illuminae by Amie Kaufman and Jay Kristoff is one of these novels.

The year is 2575 and widespread space travel, through the use of black holes, is commonplace. What’s also commonplace is rival corporations fighting over resources on remote planets. Kady and Ezra are two teens living on a planet that’s just been attacked. They escaped, along with thousands of others, but a warship is hot on their tails. And they thought their break up that morning was going to be the worst part of their day.

Told solely in emails, chat transcripts, ship schematics, psychological evaluations, ship reports, interviews, and more, Illuminae starts with this escape and follows Kady, the tech-savvy hacker, and Ezra, the military recruit, as they try to survive and escape the looming warship.

Illuminae does not disappoint. It’s told in a refreshing and easy-to-follow format, the characters are great, and there is plenty of action involving warring sides and a virus turning people into zombie-like creatures.

This story unfolds brilliantly through a wide variety of things like transcripts and reports, but later on the self-aware ship starts telling the story, and it’s all done so well. It’s not hard to follow and learn about and love these characters. Ezra and Kady are smart, clever, and have great banter in their transcripts. Some of the banter turns into lovey dovey teen romance, but since they just broke up, that’s bound to happen. But even in the lovey dovey stuff, I loved these two. The thing that one could question would be whether we’d still have chat and email like this in 2575, or whether the computer technology in the book would be so similar to today, but I didn’t let that deter me. This was just so fun that I overlooked those things and was along for the ride, and what a ride it was. Definitely check this one out.