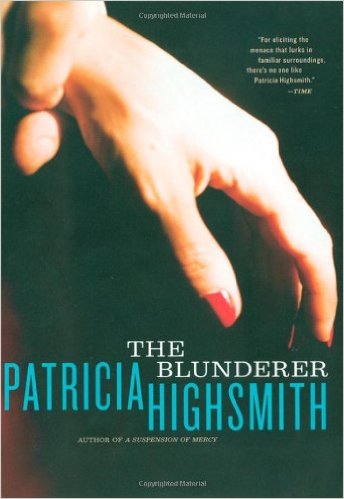 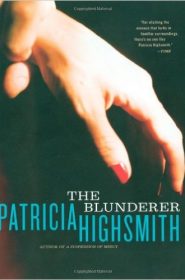 Patricia Highsmith’s old-school suspense novel The Blunderer opens with the perfect crime: A thoroughly up-to-here husband buys a movie ticket, seeks out a familiar face to acknowledge his presence, then sneaks out the back door of the theater. His wife is off to visit her mother and he intercepts the bus at a midway stopping point. He coaxes her away from other passengers and murders her, leaving her in the grass next to the highway.

Then he winds his way back home, secure that his ticket stub and eye contact with the neighbor boy at the movies will make for a good alibi. It does, kind of. Two smarties seem to see the truth: Lt. Corby a never-say-die cop and a stranger with a terrible wife.

Meet poor, poor Walter Stackhouse, beaten down by the moody love of his life, who is systematically alienating him from his best friends. She so thoroughly emasculates him, that when he sees the news story about the woman’s body left next to the highway he knows exactly what has occurred. Her husband did it, obvi. And here is how. Not that Walter plans to follow suit. He loves Clara, though, mostly because she’s a hottie.

Anyway, Walter can’t leave this murder case alone. He has to meet the husband behind this horrific bit of pre-plotting. He drives to New Jersey and does a drop-in at the man’s used bookstore — and mentions the man’s dead wife.

None of this looks good when Clara takes a bus to see her mother and ends up dead somewhere along the route. Never mind that she’s fresh from a suicide attempt. Never mind that we, the reader, know he followed the bus but didn’t meet her at the stop. (Although it is in bad form that he had told her he wanted a divorce and taken up with a young lady who is seemingly dating one of his friends.)

There is a lot of tail-chasing in this dizzy-making thriller, which is so firmly set in the 1950s that you can practically see the characters fanning themselves dramatically. I guess in all the hubbub about the movie Carol, I wanted a dose of Highsmith. The mind behind The Talented Mr. Ripley can’t be wrong, eh?

Meh. It was okay. Walter Stackhouse is a poor, spineless sap, his wife is a trope, and Corby is a mega trope. There is a lot of “But how will he ever get out of this?” moments and the sort of unexpected final scene that seems super Hitchcock-y.

But did I turn pages rapidly? Yes, I suppose I did.