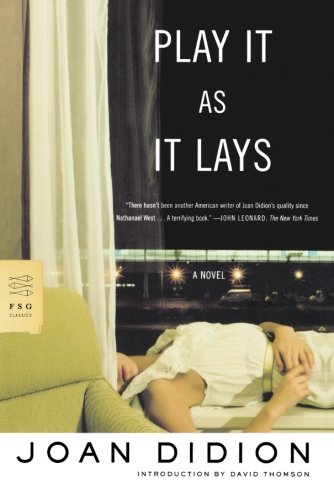 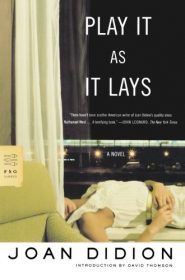 I could have sworn I had read Joan Didion’s novel Play it as it Lays, but a reference to it recently in pop culture went sailing and I felt like a fraud. Must actually read Didion to claim deep, deep affection for Didion. Must not just moon over images of her at age cigarette-handkerchief wrapped hair years-old. (I swear I’ve read almost all of Slouching Toward Bethlehem twice.)

Luckily I keep my copy handy in a nook at the top of the stairs, tucked next to copy of a plastic-wrapped Sigrid Nunez book about a monkey, seemingly nonfiction, that has as its origin in the Duluth Public Library.

I should have noticed there were no dog-ears in the Didion. A book would have to be pretty blase for me to not flip at least one corner, it’s my version of applause. And an unbent Didion? Get right out of town.

The short story is this: Maria Wyeth is coming to you, live, from a hospital where she is resting. She’s been asked to “set down the facts,” so she presents the marriage to The Carter Lang (movies), then the divorce. The origin of her good looks and migraines, versus where she inherited optimism (and how she lost it). There is also a daughter. Kate is four with a soft down on her back and an aberrant chemical in her brain. She’s institutionalized; She is everything.

This leads to the longer story, though still pretty slight. Maria’s facts are interrupted by dueling chapters: The first is Helene, an old couple-friend, who is totally Team Carter and believes that Maria killed her husband BZ, but she will still visit her in the hospital. Carter follows with memories of Maria that paint her as simply an inexplicable person.

Then we shift to third-person, following Maria as she cruises the California freeway, like she does, and dreams of a life with just her daughter.

Shit is combusting. She and Carter are stuck in a back-and-forth that involves repeating the bad habits they’ve established as a way of communicating and sleeping with other people. Her movie career is kaput, while he’s still in a pretty good place. She’s pregnant and he’s furious so there is an abortion, the effects linger long after she’s stopped bleeding (which, seemingly to her, takes eons.) Everything is terrible and heavy.

The story is told in these quick-hit chapters that leave the real what’s-what in the negative space. It’s fascinating (and occasionally confusing) but mostly fascinating to be like: “Why, yes. It does seem that Maria, BZ and Helene engaged in something last night that is giving at least some of them a case of the shames in the hot-heat of a new day.

Probably don’t read this one as a pep-talk before your big time travel to 1960s Hollywood Summer Camp in the Los Angeles Sector. But if you can stand well-put emo, dive in.

As for the dog-eared moments, here’s a fave:

“What the matter with you?”

“I’m just very very very tired of listening to you all.”