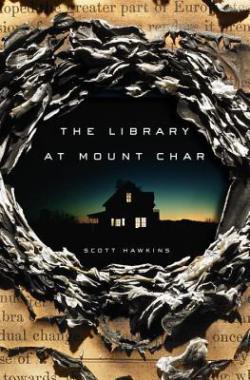 I tend to devour any book that includes librarian characters, but the librarians in The Library at Mount Char by Scott Hawkins are nothing like my kind of librarian. These librarians devour literature, but the kind that teaches them to bend time, bring people back from the dead, and engage in military strategy.

Carolyn is one of twelve children adopted by Father and taught a certain skill from his massive library. Each child learns from a different catalog; Carolyn’s catalog involves languages, David’s warfare, Jennifer’s healing, Michael’s speaking with animals, etc. Father forbids them from learning outside their catalog and punishments are severe if they do. It’s not unlike Father to burn someone alive and bring them back to life only to burn them alive over and over again while the other children watch.

When we meet these children they aren’t really children anymore. Seasoned adults well-versed in their subjects, these librarians come together to try to track down Father. He’s gone missing and they’ve been locked out of the library by some sort of force field that causes them great pain when they try to cross it. It’s up to Carolyn and her brothers and sisters to figure out how to cross the barrier and find Father.

I loved this dark, funny, strange story that at times made me wince and others make me chuckle, but which was always surprising. The story goes in multiple different directions, some involving Homeland Security, the President, and a lowly plumber, and I couldn’t have guessed where it was going or what was going to happen.

The dark part of the story is really dark, though, and at times hard to read (translation: rape), but the actions characters take don’t feel out of character. I could’ve done with a little less gratuitous violence, though, and still understood the evil characters.

But the darkness didn’t make me dislike this. I really enjoyed this first novel by Scott Hawkins. It’s written well, the characters are fully developed, the plot moves at a great pace, and the dialogue feels realistic. He’s definitely going to be a writer to watch.