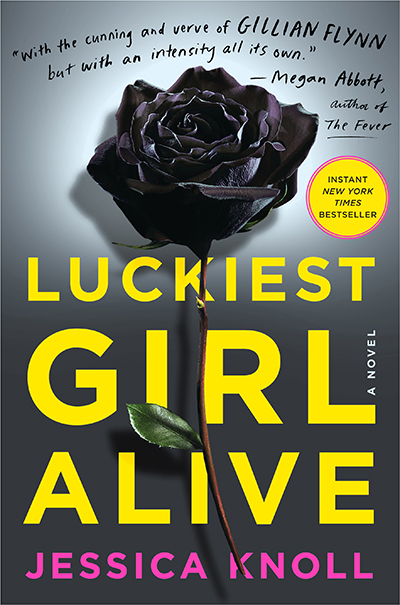 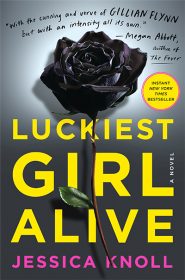 Imma warn you right now there is gonna be spoilers ahead. You shouldn’t worry too much about Luckiest Girl Alive being spoiled for you. It’s not a great book and the “mystery” is so eye-rollingly contrived that having it spoiled probably won’t ruin your enjoyment.

TifAni Fanelli goes by Ani now that she’s an editor at a popular women’s magazine in New York who has managed to snag a handsome, ridiculously wealthy man who gave her an emerald engagement ring the size of a duck pond. At first Ani is meant to come off as a sort of shallow, self-involved, status-obsessed kind of Barbie doll. However, you soon discover Ani is really using that hard exterior to protect her squishy insides. You see, Ani has a troubled past and that’s why she’s such an awful person.

Ani unspools her story in the weeks leading up to her fancy-pants Nantucket wedding to Luke. But, there’s trouble in paradise. Seems someone is doing a documentary about Ani’s troubled past and this is driving a wedge between her and the millionaire.

Back when she was still TifAni Fanelli she got expelled from her Catholic school for something I can’t remember. Smoking pot, maybe? And then Tif enrolled at an exclusive private school and poor little new girl didn’t have as much money as everyone else and so of course she was a misfit.

One night, SPOILER, TifAni gets drunk with four or five of the popular guys on the soccer team and they rape her. But SPOILER this has nothing to do with the documentary really. No, because a few months after the rape SPOLIER there is a Columbine-equse school shooting by Tif’s misfit friend and his buddy.

This story of rape and murder is told in flashback while the Ani of today is busy jetting off to Nantucket to meet with caterers and raiding the fashion closet at the magazine for the latest in designer fashions. Also, she’s starving herself so she can be a size zero for her wedding so there’s a lot of talk about hunger.

Like, I get what the author was kind of going for. How these tragedies turned TifAni into hard, pretty, ruthless, manipulative Ani. But the thing is teenage TifAni and twentysomething Ani. . . their voices are exactly the same. They’re both pretty dispassionate and disconnected from any real human emotion. Instead of imbuing Ani with any emotional depth Jessica Knoll uses these tragedies as a shortcut, because apparently bad things never happen to assholes? I don’t know.

Aside from the really flimsy premise and the trumped up drama the worst thing about this book is that the events from the past happen between the beginning of September and the middle of November 2001 and there is nary a mention of 9/11. A book that takes place in Main Line, PA about a girl who longs to go to Manhattan to reinvent herself never mentions this event.

Also, there’s a few scenes where the author literally Scooby-Doos the reader. You know how when the gang kind of gathers together and in unintelligible whispers discuss how they’re going to get to the big plot reveal? That happens in this book. At least twice. Ani has tells us she has a conversation with the documentary director about a big thing that’s gonnna happen later. What? So fucking coy. She does it again on the eve of her wedding. It’s total bullshit. Not that it really matters because by this point I was just reading the book because I refused to be beaten by such an asinine novel.

Don’t let the comparisons to Gone Girl fool you. The only thing the two books have in common are female authors and brittle main characters. In fact, if you’re in the mood, just go read Gone Girl again and skip this one. it’s not worth your time.