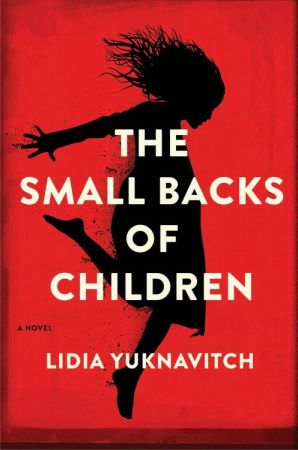 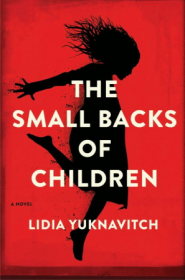 You know how sometimes you’re reading a book and a moody art dude goes into his studio and begins a complicated choreography that starts with covering his genitals in paint, segues into self-penetration with a paint-stained digit, and ends with him furiously spilling his seed on the canvas — it’s sort of his signature — and you’re like heaving and breathless, not because it’s hot (it’s not) but because it’s Art, man. And truth. And life, no death. Clutch book to chest. Applaud author’s ability to, like a maestro, draw such a visceral response.

Yeah, that’s sort of what it was like to read Lidia Yuknavitch’s other books. But with her latest, The Small Backs of Children, it feels self conscious and the sort of scene that smokes its grandmother’s pipe and always wears a hat and thinks smiling is so 90s. And then there was that moment when I squinted and wondered why I wasn’t buying into it like I had with her past stuff and why it had that silly implausibility of a late-2000s Chuck Palahniuk.

The Small Backs of Children opens with the scene where a young girl goes through a self-guided natural ritual that marks a line in the snow between then and now. An animal has been caught in a trap and she wanders out of the house in the snow to the scene of the crime, where she finds him chewing off his own arm. After he has limped away, she sort of baptises herself in a mixture of his blood and her urine and yelps at the moon.

Rewind: She’s the subject of a famous image caught by a photographer who just happened to click while the girl’s entire family was atomized behind her. The girl, who has been for years abused by soldiers, finds a barn to hide and emerges slowly into a friendship with the widow owner of the space. The photographer, meanwhile, has this famous photograph — and a writer friend who cannot forgive her for not helping the girl — especially considering a tragedy the writer has experienced.

When the writer ends up hospitalized and catatonic, her art friends band together to find the girl in the photo and to bring her back to the writer.

There are all sorts of other messes going on with relationships and pasts and presents and it’s confusing keeping straight the relationships between the Writer and the Filmmaker and the Photographer and the Playwright and the Poet and sisters and husbands and friends and lovers. It’s not all bad, for the most part it’s just fine. Experimental, sure, I don’t need it to be linear or to have a single, this-is-it ending.

But every once in a while the piece of plot is just so jarring that it feels like someone is rubbing your face in urine-soaked blood snow and yelling DO YOU FEEL IT NOW?