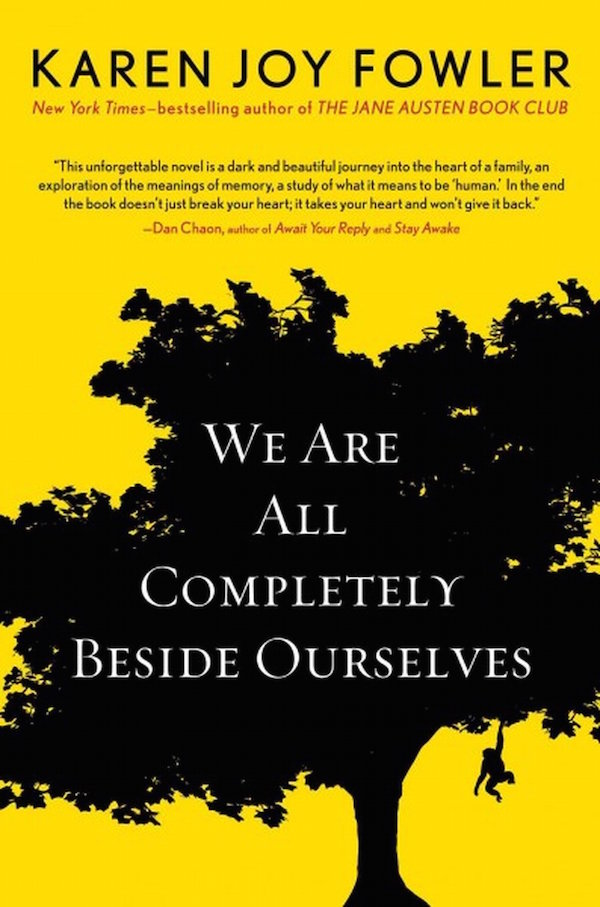 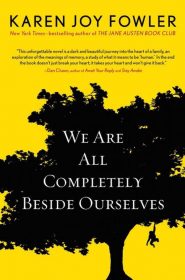 I tend to get a little irritated with novels that use really improbable or bizarre setups, because it seems sort of cheap or easy. Karen Joy Fowler’s We Are All Completely Beside Ourselves, though, lands this trick with room to spare.

When we meet The Cooke family of Bloomington, Indiana, daughter Rosemary is grateful to be half a country away in college. As the story comes together piece by non-linear piece, we realize that the Cookes adopted a chimpanzee when Rosemary was a baby and raised the two of them together as part of an experiment — an experiment that ended abruptly and tore the family apart.

In such a brief summary, it sounds like a gimmicky concept, but Fowler executes it capably.

Rosemary, her narrator, speaks with remarkable clarity and precision. She’s a realistic and natural creation, a relatable character who emerged from a strange, but not outlandish, set of circumstances. It’s a good thing, too, because Rosemary carries this book. There are other characters, of course, but they fade in and out of importance and serve mostly to flesh out the backstory. The one character who invigorates Rosemary’s present, an out-of-control drama major named Harlow, is actually the weakest point. I could have done without her and enjoyed this book just as much.

We Are All Completely Beside Ourselves is also the rare novel I admire for being untidy, for lack of a better term. Not everything gets explained, not everything gets resolved. There aren’t any bows on top of orderly little resolutions. Fowler’s may be an unusual world, but it’s one we would all recognize.