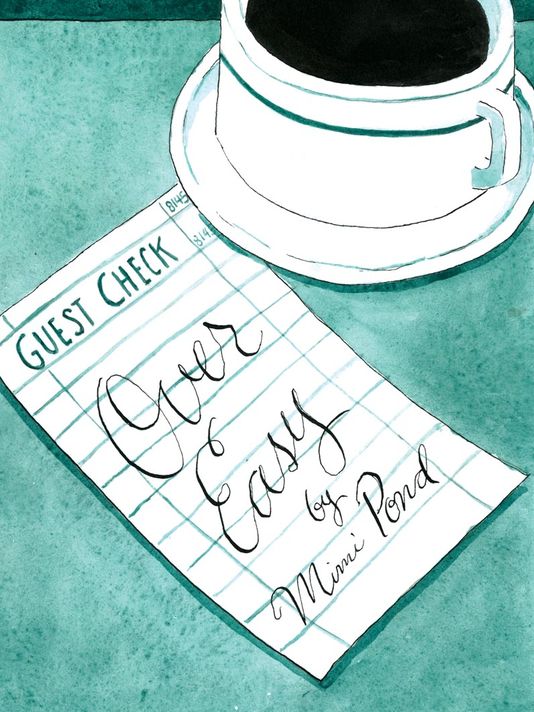 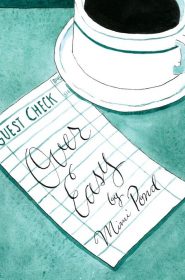 A few blocks away from the 1950s-style diner where our hero has drawn every coffee pot and customer butt-crack is a place she assumes is an abandoned Chinese restaurant. Margaret, an art student has scrounged some coins and has come to sit — and finds a place with an intoxicating aroma and, what-the, real creamer for the coffee. She’s sitting at the counter when a character spins his way into the shop and introduces himself with what has to be a far-out alias, an adopted personae: Lazlo Merengue.

Turns out he’s the enigmatic leader of the small band of characters at the center of Mimi Pond’s graphic memoir Over Easy, a two-color collection of tales from a certain Oakland diner. It’s a curious time, culturally, where all that hippie dippie stuff is being pushed aside in favor of a sleeker black leather-ness. Margaret, who is immediately christened “Madge” secures a job at the joint by telling Lazlo a dirty joke — at his request, it’s how he vets potential hires. She’s a dishwasher with her eyes on the prize: a waitressing job. This proves easy enough. She’s promoted when a spoiled inner-office romance results in a server quitting her job. And there is more dramatics where that came from. Her coworkers make up, make love, break up, snort up, and negotiate the kitchen staff and its moody minefield.

Madge occasionally gets into a romantic mess with a customer, but for the most part she takes a backseat and observes the antics of her coworkers. There’s Lazlo, who has a way that inspires people to tell him things. He’s the manager; He’s a poet. Madge’s fellow waitresses are a tough group led by Helen, a punk who has the dudes in a tizzy and works in a station that sometimes features her past, present, and future boyfriends. There’s a cranky chef, a drug dealing regular, and a terrible poet-cook who shares his work with Madge. Meanwhile, she keeps a sketchbook behind the counter and sometimes shares it with customers as proof of her other life.

Pond’s collection plays out like episodes of a TV show about a wacky crew of folks working together at a diner. And every episode would end with our straight-character, Madge, giving the camera a slight eyebrow raise. Not in a judgey way, rather, a “get a load of these folks” look. This whole book is just delicious from it’s dry humored observations about the people and the period to its quiet contemplation of the landscape. It sparks a touch of era envy, but also feels wholly relatable.