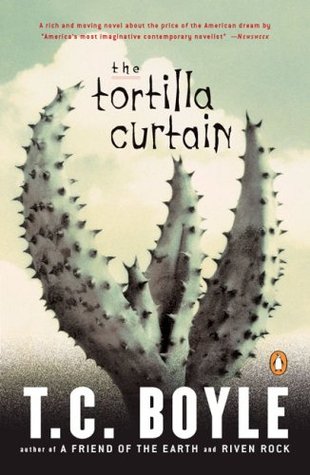 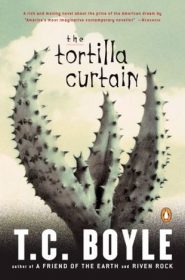 As soon as I realized the situation of this particular T.C. Boyle, I groaned and flipped through the pages and wondered if I wanted to commit to this same old, same old. I haven’t read a ton of his stuff, but the stories I have follow a formula: This Group of People versus This Other Group of People. In between there are extremes and some of the characters are loathsome — and sometimes the truly awfulest are the most recognizable which makes it all a little oof. Plus, nature/environmental themes.

In the case of Tortilla Curtain, it’s some liberal-on-paper white folks living in an almost walled off community in Los Angeles. She’s a hungry, hungry real estate agent; He’s a freelance nature writer who spends his days hiking, creating think pieces, and making lavish meals that require perfectly timed additions and temperature changes. Delaney is driving along one afternoon and accidentally hits a Candido, an undocumented immigrant from Mexico, with his car. This is all sorted out in a super dehumanizing way: Delaney basically chucks a $20, rolls on, and doesn’t forget about it immediately, but soon enough. He’s got other fish to. A coyote has found a way into the yard — something they’d believed to be an impossibility given the fence — and has made off with one of the family’s little dogs.

Meanwhile, Candido limps his way back to the camp in the Topanga Canyon that he shares with his pregnant girlfriend America, the 17-year-old sister of the wife who humiliated him back home by running off with a man who later kicked his ass in the center of the city. His aches and battered face briefly knock him out of the day labor rotation. And if him, broken and stewing and hungry in a Los Angeles hillside isn’t enough to make your innards feel raw, how about this: This isn’t even near the worst thing that will happen to him as he tries to fill a jar under a rock with enough money to rent even the shittiest of apartments, just a place with a roof to raise his family. But holy butts, if Candido Rincon isn’t the most cursed character in all of American literature. T. C. Boyle beats the shit out of him, both in the things that have happened before he lands on the page in front of us and especially while he’s contained within the pages. And, ouch. There were times when reading it felt like being Rincon’s own caved eye socket.

As for Delaney, he maintains his anti-walled community stance even in the face of his racist neighbors and his wife’s push to get the day labor pick up spot changed to a new neighborhood where she isn’t trying to sell houses. But his mind closes exponentially and he comes to develop and us vs. them-ness that feels fevered and dangerous.

Yowsa. So yeah. Tortilla Curtain is Boyle being Boyle, but he serves as a sort of therapists who sticks electric rods into certain emotions and says “Do you feel this book now? How about now, are you feeling it?” And that’s how a reluctant read became an important read and landed on an all-time list of favorites.