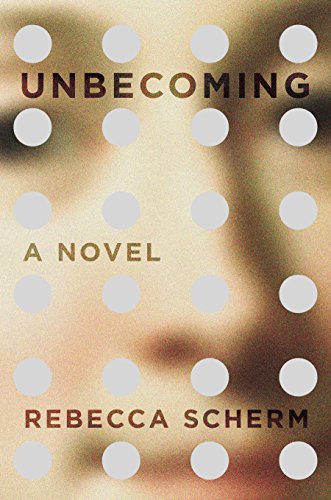 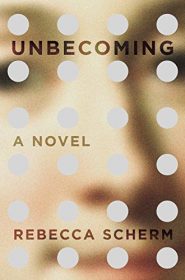 Sometimes this thrillseeker reads the book’s plot summary, trips over a couple of turn-off words, wrinkles her face and decides, “Aw, hell. Why not?” Dives into something that falls quite a few paces from her reading pleasure center.

What can I say. My Forever Person has taken to saying about me: “She’d ride a roller coaster to work if she could.”

Rebecca Scherm’s novel Unbecoming was like that. Girl living on the outskirts of Paris. Mending old treasures. On the lam from her life in Tennessee. Torn between two dudes. None of that makes me want to renegotiate my bedtime. But the reading tip came from a reputable source and variety, they say, is the spice of the e-shelf. So, yes. A surprising like.

When Unbecoming opens, our hero is lying. Her name’s not Julie (it’s Grace) and she’s not from California (she’s from the south). She’s working in a small shop where she repairs vintage things of value. It’s a quiet life in a rented room where she has observes her old life via the website of the smalltown newspaper. It doesn’t take long to learn that her ex, Riley, and his best friend, Alls, have been released from prison after serving time for looting a historic home.

Grace, it turns out, had a role in the crime. And though she’s hidden herself in a tiny pocket of the world, she’s still pretty sure Riley will be able to find her.

The couple’s relationship is told in a flashes.

Grace’s home life was unstable and when she and Riley hooked up, she was absorbed by his family — including much love from his mother. The young twosome becomes pretty much a two-headed onesome, a tie that is only briefly loosened when she goes off to college in New York City and starts to learn about art, artifacts, and the sort of pieces that discretely equal many dollar signs.

While life with Riley is very comfortable and comes with a bonus maternal lap, Grace is getting a weird, inexplicable loin-tug at the sight of her boyfriend’s buddy. Alls, too, is a tourist in Riley’s world and this is enough to advise against accidental alone-time for the two.

This feels very confessional, but I love this kind of love story: mutual coming-of-age, inseparable, finishing each other’s thoughts, entwined even when not. It’s fascinating to me. And in the case of this one, I liked the inevitable changes that occurred in New York and the tension with Alls and even the weird, seemingly tacked on revelation about a character tic that lends evidence to the probability of all of this. I could have read off of this for days, legs thrown over the back of the couch until I lost circulation.

But the crime stuff is just meh, too meh to follow in all it’s you-say-this, I’ll-do-this round-and-round. And it sort of collapses into this kinda tense, kinda confusing ending where it feels like the author decided to not making any decisions.

It’s all written in this voice that feels a little old-timey a “Goldfinch” way and every time there is a modern reference, it sort of shakes you awake. But it’s also a little hard to imagine that, in present tense, a person could maintain loose contact with family without anyone knowing where you are.

So I guess this one gets halfsies.