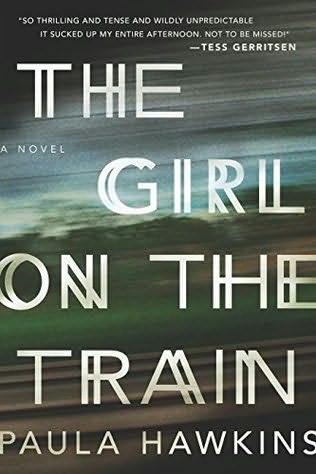 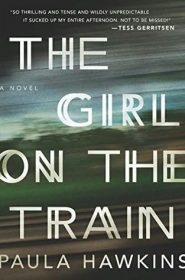 The Girl on the Train by Paula Hawkins is the it book of the moment, often compared to Gone Girl and Before I Go to Sleep, both of which I enjoyed very much. I can see why it’s being compared to those books, and in some ways it’s better, and other ways it’s not.

The girl referred to in the title is Rachel, a recently divorced alcoholic who takes the same train every day into and out of London. On her ride she passes cute little suburban homes and she imagines cute little suburban lives, particularly with one home she passes. She dubs its inhabitants “Jess and Jason” and with the slight amount of time she sees them sungazing on their deck, she envisions them as the embodiment of perfection, far from the relationship she had when she was married. But one day this perfection is tainted and “Jess” goes missing, drawing Rachel into a twisted mystery that she’s involved in, but with the amount of alcohol she had, she can’t quite remember what happened.

I don’t want to give away any plot twists, so I’ll just say that The Girl on the Train is told from three different perspectives and it’s a fast-paced thriller, much faster paced than Gone Girl and Before I Go to Sleep, which I enjoyed. Those books I could put down, but not this one with it’s plot twists, damaged, flawed characters, and some really masterful writing that easily goes back and forth between the three perspectives.

But the ending is where I don’t think this book is as good as something like Gone Girl. Gone Girl’s ending was completely unique and unexpected, and that’s not what we get here. This ending reads like a typical movie mystery, perfectly tied up and predictable. I didn’t know the ending instantly, but close reading reveals clues that too easily give away the grand finale. The ending disappointed me, but I still had a good time getting there and I would recommend this book to anyone looking for a fun psychological thriller.