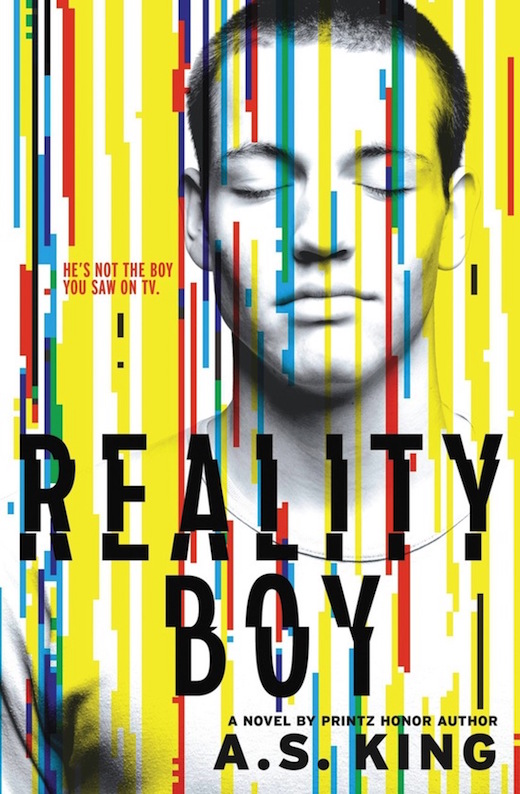 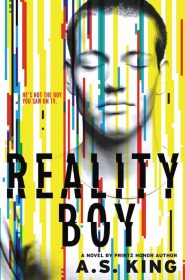 It’s not often my Rock & Roll Bookclub hits 100% when it comes to book completion (every member finishing the book). It’s just as rare that as a group we all agree a book is kind of “Eh.” The stars aligned when it came to A.S. King’s Reality Boy a young adult novel with a stunning premise and not such a great story.

Gerald “The Crapper” Faust is a soon-to-be-seventeen-year-old living in a Pennsylvania gated community with a sister, Lisi, who has gone off to college in Scotland and another, Tasha, who has dropped out of college to spend her time fucking her boyfriend in the basement. Gerald’s parents are an alcoholic real estate agent and a stay-at-home mom who spends most of her time shopping and power walking.

The Fausts are minor celebrities in town having starred in a few episodes of Network Nanny, a reality tv program about naughty kids and the parents who don’t know how to parent them. Gerald, who was five the first time the family appeared on the show, takes to popping in and on various items — fitting rooms, dining tables, his mom’s shoes — to show his anger. Thus he is dubbed The Crapper, a nickname he never overcomes.

Gerald’s anger issues follow him throughout his life and when the reader enters it, he’s a friendless kid with an anger management therapist and stuck in a Special Ed class at school because his mom says he has special needs. Or as the book so often says, “he’s retarded.”

Gerald spends his time at a boxing gym working out, but never sparring and in his imaginary world called Geresday; going to see his anger therapist, and working register number 7 at the local arena where he pines for register #1 girl.

This one is a jumble of things that never come together or feel wholly believable. There’s Gerald’s family issues, specifically that his mom has some kind of mental illness that means she can’t love her two youngest children and will do anything to placate and please Tasha, a “psychopath” who repeatedly tries to kill her siblings. There’s Gerald’s school issues, being in the special ed room even though he’s not “retarded” and how that clashes with his desire to go to college. There’s his budding relationship with Register 1 girl, the junkman’s daughter, who has a boatload of her own issues. Also, there’s a circus and the teen couple’s desire to runaway with it.

The repetition of this story along with the unbelievable characters made this one a bore. A.S. King has a habit of making characters disassociating from reality where they spend a lot of time talking to people in their mind. It was clever the first time I read it in Please Ignore Vera Dietz but with each successive book of hers I dislike it more. Gerald does this a lot and it never really adds to the story and only make me question his mental health, which might be the point. I’m not entirely sure.

Add a happily-ever-after, tied in a bow ending on this one and you got yourself a real stinker.