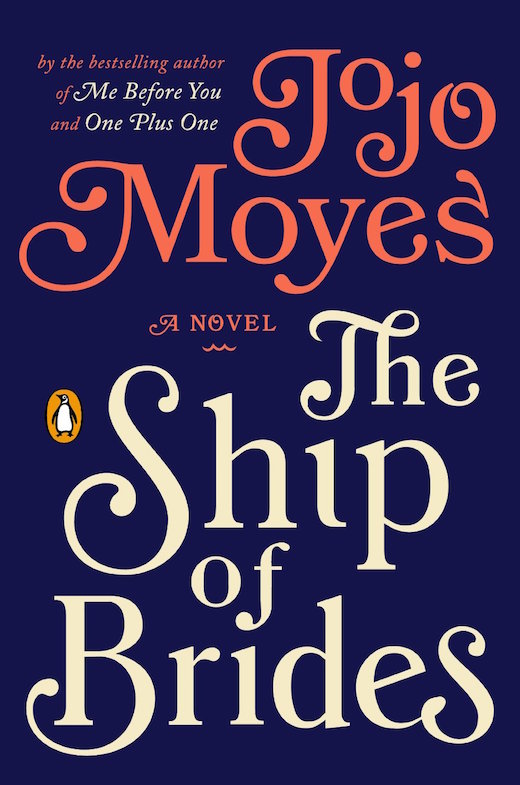 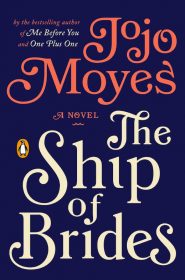 It’s 1946, the war is over, and Australian war brides need to get to their British husbands. What better way to get them there than on a British aircraft carrier carrying arms and over 1,000 men? It sounds crazy, but that’s exactly what happened to more than 600 brides. Jojo Moyes gives us a fictional account of this fascinating story in her wonderful book The Ship of Brides.

We are introduced to four women: Jean, a young, naive 15-year-old bride; Avice, a rich, snooty bride; Margaret, a pregnant, farm-girl bride; and Frances, a mysterious, war-nurse bride. But they all have secrets. The great thing about these characters is that they are all fully fleshed out, with flaws, secrets, and transgressions that make them so much more real than the picture-perfect brides they were portrayed as in the media.

Jean reminded me of Lydia from Pride & Prejudice, though not quite as annoying. I actually like Jean. She’s young and acts before thinking, but she would’ve been the one I would’ve wanted to hang out with on the ship. She’s a party girl who wants to flirt, even though she’s married. What’s wrong with flirting? She’s not cheating on Stan, whom she really, genuinely loves.

Avice is the one I wanted to punch. Avice feels above everyone and everything. She’s too good to be confined to small quarters on a stinky, dirty ship with a bunch of stinky, dirty men. She should’ve been pampered on a cruise ship. Avice is making her way to Ian, a soldier she married in haste hours before he shipped out.

Margaret is the one that seems like she can get along with everyone, so I would’ve hung out with Margaret, too. She’s calm and understanding, but she can hold her own, which she’s had to do with a house full of men and no mother around. Margaret met her husband Joe through her brother and their engagement story is priceless.

Frances is the most secretive of the ladies. We meet Frances before she boards the ship when she’s working as a nurse, and the other nurses are standoffish with her. But it seems like this is how Frances likes it. On the ship, where these four women share a cabin, Frances is fine being alone and hiding in the crowd. Slowly we learn more about Frances’ husband and her past, and her past comes back to haunt her.

I loved reading about every one of these women, even Avice who I hated, which is the sign of a well-written book. Even though I hated Avice, I understood her and why she behaved the way she did, especially when she gets into a popularity war with another rich bitch on board. But every one of these women came to life for me like starlets on a screen. With vivid detail, I could see them and feel their anxiety and nervousness about leaving home and what laid ahead. I was was fully immersed in their stories and I didn’t want to let them go.

I was also pleasantly surprised that so much happens on board the ship. From women and men sneaking away, to betrayal, to “Not Wanted, Don’t Come” telegrams, to a beauty contest, and more, there was constantly something happening to or around these women and I was thoroughly entertained.

This is my first Jojo Moyes book and now I want to devour everything else she’s written. I think I incorrectly wrote her off as a simple chick lit novelist, and there’s nothing wrong with chick lit, but when I opened this book I didn’t expect to find this level of character development and historical detail in her writing. Each chapter starts with real clippings from newspapers and books that talk about the ship or things happening at that time, and it really shows how much research she did to skillfully bring us into this time era and bring alive these women.