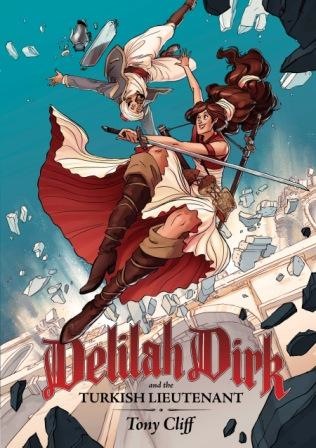 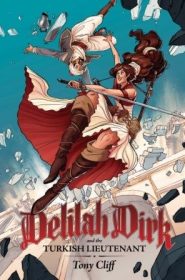 Hooray for Delilah Dirk! That’s what I want to scream after reading the graphic novel Delilah Dirk and the Turkish Lieutenant by Tony Cliff.

To start, you should know the story really isn’t anything new. We have an adventure with an over-the-top hero with a bumbling sidekick and we’ve seen that before. Just think of Indiana Jones or any Clive Cussler novel. What is refreshing here is that the hero is a woman who outwits and outfights men at every turn.

The best way to describe Delilah Dirk is that she’s a fearless troublemaker. No matter how inconceivable the situation appears, Delilah always has a plan to fight and trick her way through it. She often does what magicians do: make us look to the left while they’re getting away with murder on the right. But that doesn’t mean she only uses her wits. Delilah is a master swordswoman and she can take on many men at once with no problem.

Delilah’s bumbling sidekick is Selim, a Turkish Lieutenant, and he’s actually the narrator of the tale, telling us how he follows Delilah and becomes her sidekick, complaining the whole way. He makes delicious tea, is very timid, and wants to please everyone, even to his own detriment. Since he’s the narrator we learn more about him than Delilah, but Delilah easily steals the spotlight. She shows him how to have adventures where they storm castles, steal jewels, and escape capture.

As much I love Delilah, there is one annoying thing here – her clothes. She’s wearing a dress (or skirt?) and the top of the outfit is mummy chic with gauze-like material wrapped around her body. There is also a key hole cut out in her top, of course, because if you’re a woman going on adventures you must wear skirts and show cleavage. Duh.

But look past her stupid outfit, because Delilah is a hell of a good time.