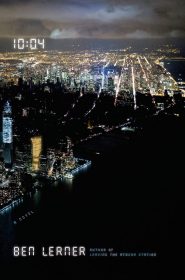 Before you open a novel by Ben Lerner, you have to steady yourself against, well, anything, and just make an internal commitment to stick to it, even if the bastard chucks a sentence like this opener in your direction:

“The city had converted an elevated length of abandoned railway spur into an aerial greenway and the agent and I were walking south along it in the unseasonable warmth after an outrageously expensive celebratory meal in Chelsea that included baby octopuses the chef had literally massaged to death.”

(Actually. Wanna know the weird thing? In retrospect, that is among the least obnoxious sentences in 10:04, this novel-ish bit of experimental writing).

I was willing to ride along only because apparently I loved his first novel Leaving the Atocha Station, which also seemed to star a fictionalized version of the author saying extremely pretentious things in a way that is either a) funny, satire or b) a good reason to never get trapped in a corner with him IRL. So what gives? Why wade through pages of Lerner loving Lerner, the equivalent of a kid staring into a mirror, philtrum slick with mucous, who cocks his/her head and says, awed, “Why. I’m just so lovely when I cry.”

Dude is a master storyteller. In between the deep thoughts from a poet’s heart and extra syllables are these nuggets of intrigue, the kinds of stories that exist out there in the real — but which require a kind of expert to extract.

So. Ben is Ben, a guy who has just secured a relatively massive advance on the strength of a short story that ran in the New Yorker and his insistence that it can be woven into a novel. So he parties with his agent, which includes the octopi, which have succumbed to a very spa-like end. Meanwhile, Ben has just discovered that he has a heart condition that could potentially kill him, like, now. And his best friend, a woman he seems at the very least sexually curious about, has asked him to donate his swimmers because her clock is ticking. Although she wants to do this through a clinic, not copulation.

For much of the novel, he wanders from event to event where he has interesting conversations with other members of the literati and fellow members of his co-op and his friends. The prevailing theme seems to be something like: The past is different from what we remember. He uses real life scenarios involving the Challenger and the mysterious case of the Brontosaurus to illustrate his point, but also the anecdotal evidence of his friends and his own inclusion of the story that ran in the New Yorker, which is a slightly hip-checked rendering of events that happen to the Ben who is walking through this story (which, it seems, could mean a double hip check from the grimacing? Ben wrapped in a scarf in the book’s author photo).

Throughout the book, Ben kind of kicks around the structure of the novel he will produce. He’s got a loose plot about forged letters from late lit-types, but he actually seems to be writing the novel we are reading.

His agent says to him: “Develop a clear, geometrical plot; describe faces, even those at the next table; make sure the protagonist undergoes a dramatic transformation.” To which Ben thinks: “What if only his aorta undergoes change. Or his neoplasm. What if everything at the end of the book is the same, only a little different.”

And that is pretty much exactly what he did.