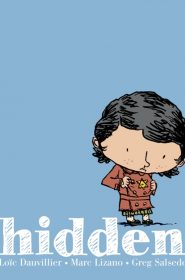 Told with kid gloves, the children’s graphic novel Hidden by Loic Dauvillier is a sweet, sad, and hopeful WWII story told by a grandmother to her granddaughter.

The story opens at night with a young child not being able to sleep and discovering her grandmother deep in thought. She asks her grandmother if she was having a nightmare and begs her to talk about it.

The story the grandmother tells begins in 1942 Paris when she was a young child. At first we hear about friends and school, but when she has to start wearing a star on her clothing, everything changes. Told by her father that their family was going to be a family of sheriffs, she proudly wears the star to school, but she quickly learns the truth. The story continues with the family being separated and the grandmother telling her granddaughter what happened to them.

I say this story is told with kid gloves because there are no scenes of beatings, torture, or death, though it’s all there. We see trashed apartments and businesses. We see people yelling and screaming. We see weak, skinny people. We hear about camps. But none of it is well defined because it’s all about what this young girl is allowed to see and hear, and her family protected her quite well. This is a quiet, childlike story of the Holocaust.

At times I wished things were more defined, or that there was more time given to parts of the story, because things move along quite quickly. But if this were something given to a young child just being introduced to WWII and the Holocaust, this might be perfect. It’d be something you could read with a child and fill in the blanks as you go.

And I have to mention the illustrations. I love them. One of my favorite things about graphic novels is when we are shown scenes devoid of dialogue or text, or when the illustration shows you what isn’t being said. Here it’s done perfectly. There are great scenes showing the grandmothers isolation at school, the destruction of homes, the missing posters, and more.

Overall, this is a good graphic novel for children. It gives a little bit about the subject area, shows how some children were hidden from the terrors of the war, and could be a great introduction of this topic.