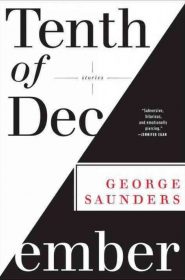 You know when you’re in high school and you have to write a paper on anything, anything you want, so you decide to write about something weighty and out of your element and it requires trips to the library and maybe even microfiche. The more you learn, the more your topic grows and all of a sudden you’ve lost control of this beast. Eventually, with a very shaky voice, you present your paper to your class. You insert jokes to distract them and sound defensive when someone asks a question. You get a B and whatever, the teacher uses green ink to write “unfocused” on the critique sheet. It was brutal but it’s over.

Then the next girl stands up and her paper is about “The Goonies” versus “Stand by Me” and it’s well-written, hilarious (of course) and provocative. On top of the blasted hoots she gets mid-speech, she gets a standing O and someone tries to carry her out of the auditorium — but the teacher nixes that just before the door.

George Saunders is that girl. He’s the one who took the assignment to write anything, anything you want, and crafted the super lively, super fun albeit super dark, short story collection Tenth of December. These stories all kind of feel like long setups to punchlines, sort of “A priest, a buffalo, and The Beatles walk into a bar. . .” or the sort of witty bits that make McSweeney’s a fun place to wile away an afternoon.

“Puppy” is a grim tale of a family that wants to buy a dog and a family that wants to give another family a dog or else they will have to kill it. “Escape from Spiderhead” is the story of people-as-guinea pigs involved with sci-fi drug testing that has them falling in love, humping like mad, and then falling back toward ambivalence.

The best of these is the opener. “Victory Lap” is the story of the young teen-aged Alison Pope. She’s of an age where she might imagine she’s descending a marble staircase. She might insert French phrases while talking to herself. She might imagine romance with bumbling boys and might have even kissed one recently. Two seconds later she’s slipping into another daydream. Then there is Kyle Boot, down the street, growing up under some super strict rules about carpeting and shoes, swearing and points accumulated for doing this or that. His head has the same sort of hair-trigger between child and trying to grow up. He copes with his parents rules-y rules by thinking streams of dirty words. Things get interesting when a stranger with a van pulls into the church parking lot, knocks on Alison’s door, then tries to wrangle her back to his van.

This entire collection feels like taking your brain to a playground. But a fun playground with strategically placed swings and other features that make you smarter, taller, and funnier without you even noticing.