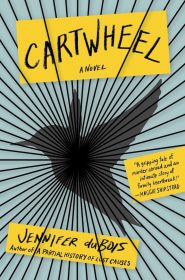 I think for writers, maybe for everyone, fan fiction is the natural response to the inexplicable crimes that make headlines. We need to take the bare bones of a horrific case, give the noggin a rattle, see where they fall. Consider motives, block scenes, shred alibis. People are just people. They’re not exactly exotic creatures with unknowable habits and tics. If we really look at the pieces, if we dirty our fingernails and limp past dehydration, we can probably come up with a pretty detailed visual of the crime unfolding and a decent answer to the questions “Who did this” and “Why?”

In fact, Lifetime Movie Network has built an entire channel based on fictional accounts of true crimes.

“Fan fiction” might be a callous term to use to describe what Jennifer duBois has done with her novel Cartwheel. This isn’t the raw vamp meat of a Twilight bulletin board. This is a duBois using the true story of the Amanda Knox International Incident as the template for her character study of the kind of person who might attract eyes and judgements from all over the world after her study abroad roommate is murdered.

Our central figure is the boisterous Lily Hayes, an American woman studying in Argentina. She’s pretty, an attention grabber, a loud talker, unapologetic. She shares a living space with Katy — subtle and lovely with Los Angeles sheen — in a home owned by a troubled Argentine couple: Her, insecure and angry; Him, drunk and in troubs with his business. By the time the story starts, Katy has been murdered and Lily is in the clink as the A-No. 1 suspect. Her DNA is all over the scene and her response to the death has been confusing to the home viewers: There was a sly look at her ex-boyfriend Sebastian in the condom aisle at the convenience store. But, mostly, there was the cartwheel she did at the police station in between interviews with investigators.

duBois tells the story from multiple perspectives. Lily is thinking back on her time in Argentina. Drinking wine and reading Borges. Meeting Sebastian. Taking a job at a cafe. Her ever-evolving feelings about her roommate.

Lily’s father is in present tense. He’s flying to Argentina with Lily’s sister. His ex-wife will meet them. This is another crusher in an already tragic life of this family.

Eduardo is the prosecuting attorney. He sees similarities between Lily Hayes and his ex, a woman who ripped his soul into pompoms when she left him. Now, as he’s beginning to work on this case, she’s back.

Sebastian is the next door neighbor and Lily’s casual lover. He’s a rich orphan whose parents were government agents. He has no real reason to leave his mansion.

Truth is, Amanda Knox also did something like a cartwheel while she was being interrogated about the death of her roommate while studying abroad. Knox called it yoga, but whatever. If I were to write fan fiction about duBois writing this fan fiction, I’d say that’s the moment that was the trigger. (Not a very edgy wager, since it’s also the name of the novel). That’s when Amanda Knox went from juicy tabloid-fare to a curiosity and duBois suddenly had to know: What kind of a woman does a cartwheel under these circumstances. It was born of a writing exercise and bred as a novel.

Results are mixed. duBois has whipped up some fascinating players, especially Lily, whose actions are never interpreted the way she anticipates. It’s a nice study of who we are versus who we want to be versus who we are. Her parents are people whose grief has had a profound effect on the daughters and duBois is super subtle in her telling of this. Sebastian isn’t at all the character he seems to be, and that, too, is slowly revealed. Just Eduardo is a massive dud with his lack of luck in love and his sort of cliche old-school investigator voice.

If you know how the Knox incident ended, you know how this one ends and it’s not satisfying. With the plot written, duBois just invested herself in spinning the characters. It would be interesting to know if the Knox ending was the ending duBois saw for this imagined cast or if she had to force them toward this ending because she had committed to this story line.