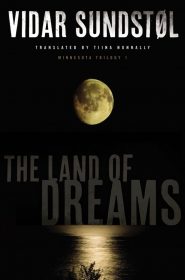 As a forest cop, Lance Hansen’s job usually involves citing fisherman for a lack of license or similar easy-peasy no-big infraction. During a routine check on an illegal campsite Hansen finds a naked and bloody Norwegian tourist near Father Bargas’ Cross in Northern Minnesota. The man leads him to the also naked, brutally beaten body of another Norwegian tourist. The near-catatonic first naked man can only say one word: love. Except he says it in Norwegian.

Our hero is quickly shoved aside when the heavies come to town. The FBI and Norwegian dick Eirik Nyland are here to solve the murder in Vidar Sondstol’s novel The Land of Dreams, the first book of his Minnesota Trilogy which is set along the shore of Lake Superior between Two Harbors and the Canadian border.

Lance Hansen is a loner, wife left and took the kid, who spends his time deep in the region’s historical archives. Upon discovering the dead body, one of his colleagues wonders aloud whether this was the first murder in Cook County history. The question sticks in Hansen’s craw, consuming him as the professionals investigate the present-day crime. He’s developing a theory that ties a fabled man who went missing eons ago to a relative who landed in Cook County under folklore-like circumstances.

At the same time, Hansen is keeping a crucial deet from the big boys investigating the dead Norwegian.

Sundstol’s book, which won a crime-writing award in Norway, was published about five years ago. It’s just recently been translated and published by the University of Minnesota Press, largely because a bunch of Norway natives now living in MInnesota got ahold of the book by a fellow Norwegian set in their adopted home. A language class in Minneapolis has used the original to brush up on their Norwegian and a Norwegian guide company recently brought a busload of fans up here to tour the North Shore of Sundstol’s series.

Sundstol has a good eye — and sense of recall — for the Northern Minnesota landscape, which he describes in pinpoint detail in his book. In one scene, a character drives down Duluth’s Central Entrance, and it couldn’t be more clearly drawn if I sat in the parking lot of the Coppertop Church and wrote it myself. Samesies goes for the people and vistas further up the shoreline. It’s interesting to think that while we were going about our own business, unbeknownst to us, all sorts of crime fans in Norway were reading about this place. And now that it has made the jump to Minnesota, it’s fun to see what he had to say about all of us and this place where we live

Minnesota landscapes aside, this is not your conventional whodunnit. In fact, when someone is finally charged with the murder it has little impact. You see that this is less about a murder and more about Hansen’s inner seesaw struggle. Although eventually it probably will be more about the murder. Sondstal has two more books to slowly weave his way toward a conclusion. They are scheduled for release in the fall of 2014 and 2015.