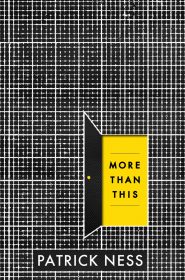 I read this book in a day.

That could be my whole review, because even though I read a lot, I don’t often finish a book in one sitting, so you know it has to be good. Although now that I think about it, this is the third Patrick Ness book I have finished in a day. I just can’t put his books down.

More Than This opens with a death. Seth is in the ocean, off the coast in Washington state, waves throwing him against the rocks, and his skull fractures. He dies. It’s when Seth wakes up that the story begins.

Seth wakes up in England, naked, thirsty, and in a town that looks very familiar, but there is no one in sight and everything is dirty and dusty. Is he dead? Is this the afterlife? Seth assumes he’s in Hell for things he’s done in the past, things we don’t find out about until Seth starts dreaming. His dreams are very vivid, like he’s reliving his past, and the things he’s reliving are either very happy or very sad. Through his dreams we start to understand why he thinks he’s in Hell.

For a long time Seth wanders the town, and we’re filled with his guilt, regret, and loneliness, but the story really picks up when he finally discovers two other people – Tomasz and Regine. Tomasz and Regine make Seth question everything he thinks he knows about where he is and what is happening.

I can’t say anything else or I’ll give away major spoilers, but I will say that this book blew my mind, but I really don’t know how to classify it. Sci fi? Fantasy? Mystery? I feel like it has all these elements and none of them at the same time. By the end I thought I’d be able to say where it fit, but the ending left me with more questions than answers. This is such a weird book, but weird in the best way possible.

And getting to the ending, I thought I had things figured out, that I knew where these three were and I knew what was happening to them, and then Ness would throw something new at me. This happened multiple times. I questioned what I thought I knew over and over again, just like Seth.

I realize this is very cryptic, so instead of giving plot spoilers, let me tell you about the characters. I loved Seth so much. Through his dreams we learn about his life before he died, including his relationships with his mother, father, and younger brother Owen, who has some developmental problems ever since the incident. Seth blames himself for the incident and it’s partly why he thinks he’s in Hell. Watching this family dynamic, and Seth struggling over his role, was what really drove me to turn the pages.

I also loved Tomasz, who reminded Seth of his younger brother, and Regine, who’s like Tomasz’s big sister. Ever since Seth meets these two he wonders if they’re real or if he was able to dream them up, because he thinks he’s destined to be in Hell and wander the afterlife alone. But these two seem so real. They each have stories about how they died and they each struggle with their family dynamics, too. Are they real or has Seth dreamed up people who can relate to his struggles?

I’ve been trying to figure it out since I finished it, but when it all comes down to it, it doesn’t matter what genre this fits into or whether or not I still have questions. The ending of this book is perfect and very insightful. After his confusion, anxiety, panic, and anger, Seth finally comes to acceptance and has a final, epic revelation. So. Good.