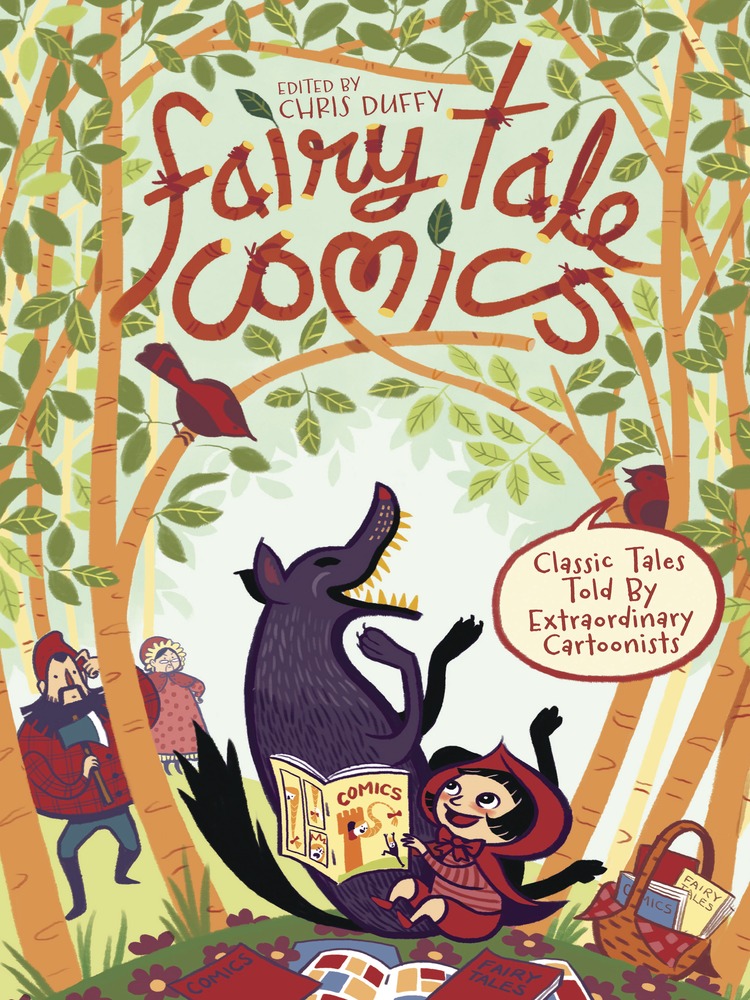 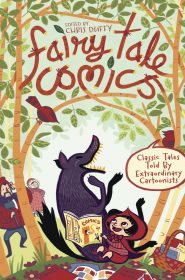 A couple years ago I read and loved Nursery Rhyme Comics, a fabulous, updated look at beloved nursery rhymes with the cartoonists and illustrators making them their own. I was really excited to see the same editor put together another collection, this time tackling fairy tales.

Fairy Tale Comics includes more than fifteen different fairy tales, from well-known ones like “Little Red Riding Hood” and “Snow White,” to lesser-known ones like “The Prince and the Tortoise” and “Rabbit Will Not Help.” Some of the cartoonists and illustrators followed the tales as we remember them while others took liberties and transformed them into something new.

One of my favorite tales is one that was transformed. Raina Telgemeier tells the story of Rapunzel, and it begins like the original Brothers Grimm story, with a pregnant woman craving some rapunzel from her neighbor’s garden. The husband crawls over the wall to steal the rapunzel but he is caught and has to pay the price of his daughter, who is named Rapunzel, taken by the neighbor, and locked in a tower. We’re all used to where the tale ends, with a prince rescuing Rapunzel, but Talgemeier tells it a little bit differently. In her tale, Rapunzel rescues the prince by turning her hair into a lasso. It’s adorable and a great twist on the tale that kids will love.

Another great tale is one I was unfamiliar with – “The Boy Who Drew Cats.” This is a Japanese tale that Luke Pearson illustrates and it’s about a giant rat goblin who takes over a tower and a young, little boy who likes to draw cats. The boy only wants to draw cats. His father tries to get him to do multiple different things, but he just always ends up drawing cats. You can probably guess that his cat drawing comes in handy with the rat goblin and he becomes a hero. The story is very cute, but the best thing about the story is the little boy. He just continually says “I like drawing cats.” I couldn’t help but laugh at how cute he was and how, no matter what situation he’s in, he just draws cats. It’s a great, adorable introduction to this tale.

One of the best tales is one that is told through the illustrations alone. Graham Annable uses no text in telling us the story of “Goldilocks and the Three Bears.” It’s easy to follow Goldilocks as she eats porridge that’s too hot (fire comes out of her mouth), too cold (she shivers), and just right (she devours it). When she goes to the chairs and the beds, the illustrations continue to easily show us why she likes one over the others. And in the end, when she’s discovered by the bears, her reaction is perfect and the bears reactions cracked me up. This would be a fabulous story to show kids and then challenge them to draw a tale using no text.

I did like Nursery Rhyme Comics more than this collection because the cartoonists and illustrators seemed to take more liberties with the rhymes. But this collection is still great and gives a fun, new introduction to some of these tales. I hope there are more collections in the future, but what will they take on next?