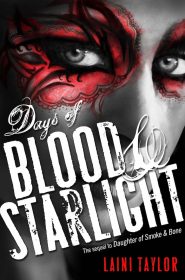 Last year I read and loved Laini Taylor’s Daughter of Smoke & Bone. The story followed Karou, a human raised by chimera, creatures from Eretz that have animal and human attributes. In Eretz, the chimera are at war with beautiful seraphim (or angels), one of whom Karou falls in love with, which becomes an issue when Karou discovers she’s a reincarnated chimera. Brimstone, the chimera who raised her, uses the teeth of humans and animals to reincarnate fallen chimera and he has been hiding Karou in our world.

When we last saw Karou, she and Akiva (the beautiful angel) are on the outs, Brimstone is missing, humans are made aware of angels, and Karou decides to enter Eretz to search for her family. Days of Blood & Starlight picks up right where Daughter of Smoke & Bone ended and we get the full picture of what has happened in Eretz. The chimera have been defeated by the seraphim and Karou has taken Brimstone’s place in the art of resurrection. She’s busy building the chimera army and blaming Akiva for everything. Akiva, on the other hand, thinks Karou is dead and he’s in mourning, diving into warrior training with his siblings Hazael and Liraz. And Zuzana, the best friend ever, is in the human world, searching endlessly for Karou.

The story that continues in Days of Blood & Starlight is just as strong as Daughter of Smoke & Bone, but it is definitely darker. We get a strong picture of the conflict between chimera and seraphim and we are engulfed in the world of Eretz and this war. This is all about war, and it is in your face. We see the power struggles and the horrors of war in very vivid, sometimes disturbing, descriptions, with both sides being good and bad. They each have victories, losses, and downright psychotic players. Taylor doesn’t shy away from showing us atrocities on both sides to highlight the complexities of war.

In juxtaposition to the bleakness of war, we also see Zuzana again, which made me so happy. Zuzana is Karou’s best friend and was one of my favorite characters from Daughter of Smoke & Bone. She and her boyfriend Mik (the cutest couple ever) are back and searching for Karou when they start hearing tales of a girl stealing teeth from museums. They eventually do find Karou and their interaction with the chimera beasts was the comic relief needed in the middle of this tale.

I’ve heard some people say negative things about this book, and I wonder if they were thrown off by the change in tone. This is definitely darker than what we got in Daughter of Smoke & Bone, but I was expecting it. I felt like Daughter set us up for the war we’d see in Days of Blood & Starlight, and I was not disappointed. I loved this book and I can’t wait for the final book in the trilogy, Dreams of Gods & Monsters.