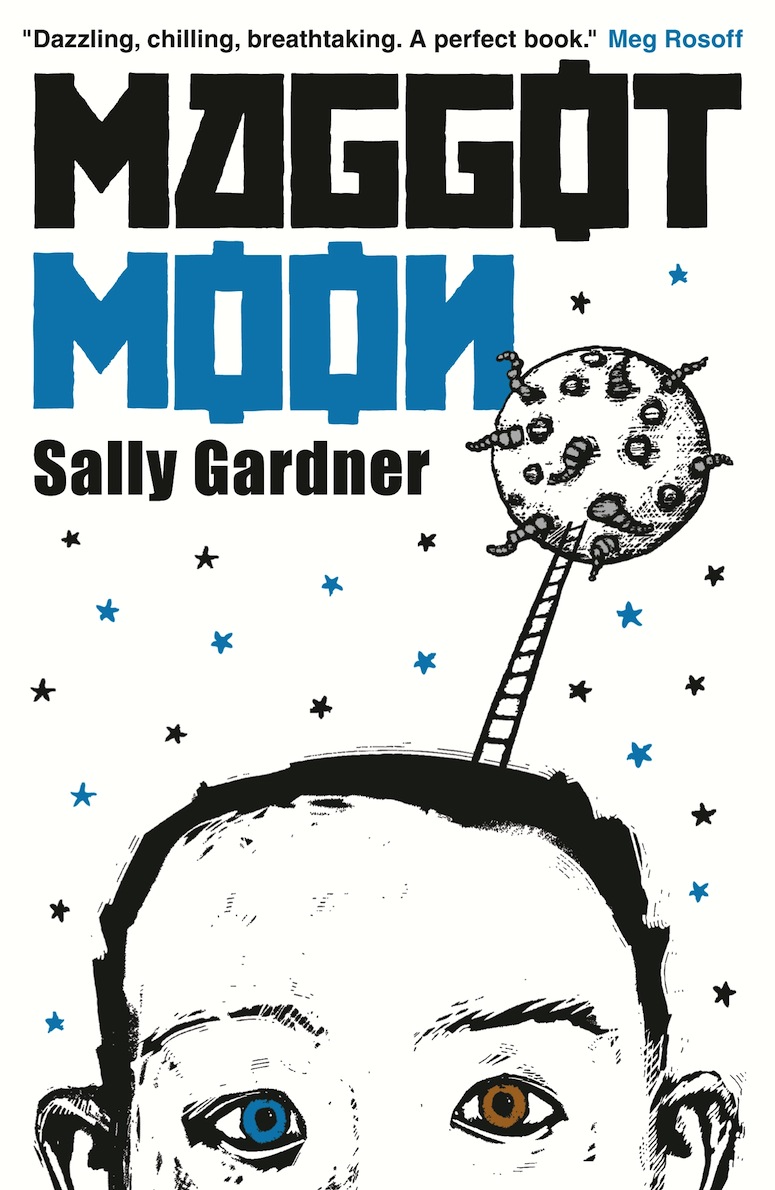 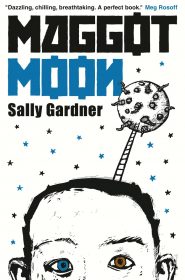 Maggot Moon by Sally Gardner won the UK’s Costa Coffee Award and the Carnegie Medal, so I had to check out this alternate history about the boy with one brown eye and one blue.

It’s 1956 and Standish Treadwell is a dyslexic teen living in a totalitarian state in the UK, but an alternate universe UK where a Nazi-like group representing the Motherland rules with an iron fist. Anyone who questions the Motherland mysteriously vanishes, like Standish’s parents did years earlier.

Standish tells this story and from the beginning let’s us know that he’s often told:

Don’t worry, the whole book isn’t written in prose, but this statement is and we hear it many times to remind us of the struggles Standish has beyond living under Motherland rule. Standish is dyslexic, has a hard time in school, and is used to being bullied, both by students and teachers who serve the Motherland. Beatings are common in a school where the truth is nowhere to be found.

The story moves beyond Standish’s school and soon we start looking to the moon. The Motherland is going to the moon where they claim they can store weapons to further expand their rule of Earth, but Standish and his grandfather aren’t buying it and what they do drives us to the final, shocking ending.

I struggled with this one, because I liked many things about it, but overall it just didn’t connect with me.

Let’s start with Standish’s dyslexia. I don’t know much about dyslexia, so I wasn’t quite clear on how much this affects him, because he’s a very bright kid, even though he’s told the opposite. He uses fabulous metaphors and clever descriptions to tell this story, and he’s smart, savvy, and brave. I haven’t read another story with a dyslexic character, so I don’t have a book to directly compare this to, but this story reminds me of the narrator in The Curious Incident of the Dog in the Night-Time. In that book an autistic teenager tells us the tale but also gives us a lot of insight into how autism affects his day-to-day activity. That’s more of what I wanted here. I didn’t expect to fully understand dyslexia after reading this, but if it was supposed to be extremely important to Standish’s character, it didn’t come through for me. He seemed like an average kid to me, but maybe that’s what the author wanted to show? That dyslexia isn’t a disease or disability, it’s just the different way Standish sees things? Or maybe I wanted to see more of the dyslexia because the hype surrounding this book focused on it so much?

I also had a hard time with how this story jumped back and forth in time without any indication. In one chapter Standish talks about when Hector was staying with them, and in the next chapter Hector is staying with them. This back-and-forth happens quite frequently and it’s up to the reader to figure out where we are in time. Sometimes it was easy to tell, and sometimes I had to read a good portion of the chapter to figure out when it may have happened. I don’t mind stories jumping back and forth in time, but here it didn’t flow very smoothly for me.

The flow bothered me a lot, but I think what bothered me the most was that there was so much left out of the story. This is a short book, 279 pages, but many of the pages are blank. Some chapters are one-page long, with the back of that page left blank or with just an image. I would’ve loved to learn more about the Motherland and this totalitarian state. Some really tragic, awful things do happen, so the danger of living there is clear, but I just wanted more, more, more. I would’ve really loved this if I better understood who these Motherland people were and how they got there.

I like many things about this story, so I guess I can say that I liked it, but I didn’t love it. I am glad I read it, though, because I really do like Standish, even if I didn’t fully understand his dyslexia. He’s a great kid and meeting him was worth the read.