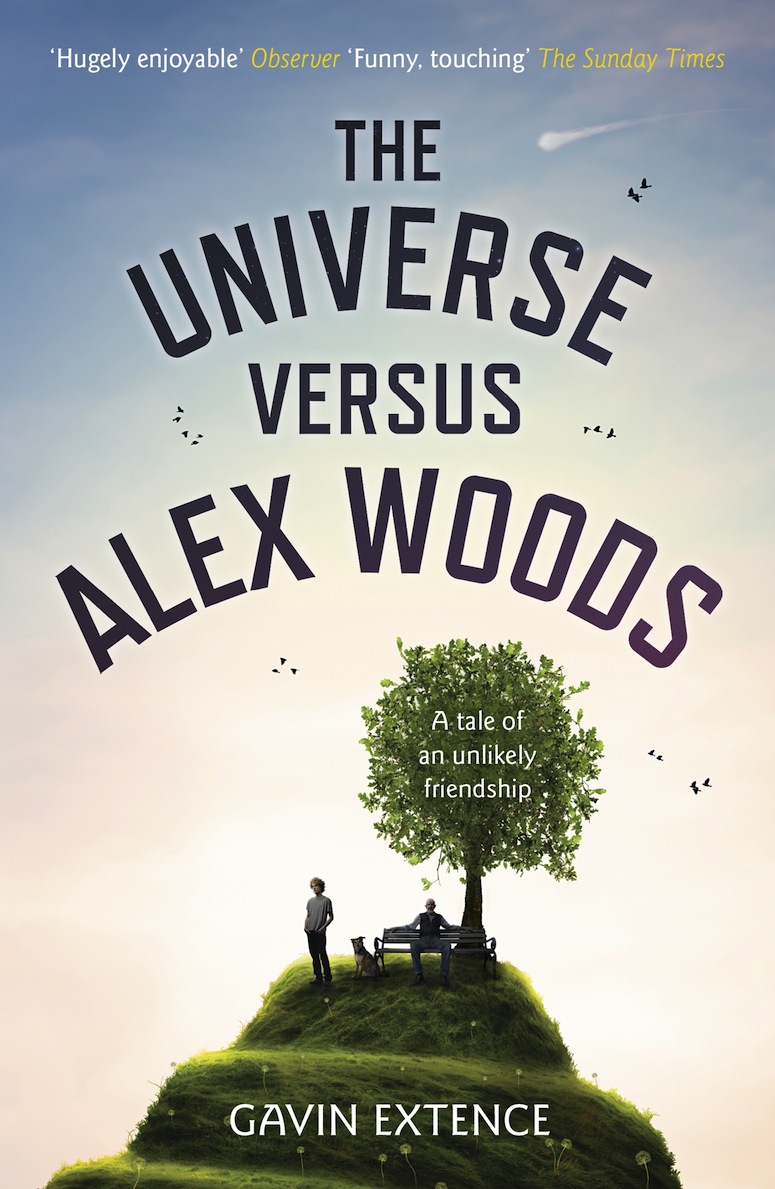 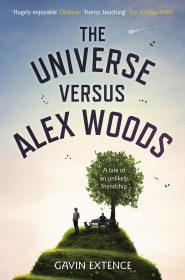 If you’ve ever been to the Minnesota Landscape Arboretum, you know there are winding walking paths that bring you through beautifully landscaped gardens. Typically on these paths you find people taking pictures, picnicking, or slowly meandering, but if you walked on them today you may have seen me wiping away tears. You’d think I would know better that when a book begins with someone in an urn that by the end I will eventually find out how he got there, but it’s the getting there that did me in.

The Universe Versus Alex Woods by Gavin Extence begins with 17-year-old Alex Woods being stopped at customs in Mr. Peterson’s car while trying to return to England. Mr. Peterson is in the passenger seat in an urn and Alex has a slight epileptic seizure. I’m not giving away major plot points here, because you find out about these things before chapter one ends. In chapter two the story jumps to when Alex is ten and a meteorite strikes him in the head.

You probably think it sounds very far-fetched that a meteorite actually hits him in the head, but Alex, and the rest of the world, are just as shocked by it as you are. Alex and his meteorite become famous overnight, but unfortunately Alex also has to deal with some major medical issues because of it. And as if a smart, geeky kid doesn’t already feel like an outsider and get picked on at school, throw in a freak accident and some epileptic seizures and Alex was bound to be a bully target.

But the real story takes place after Alex, getting chased and bullied by some awful boys, meets Mr. Peterson, a cranky, old, Vietnam vet. To pay back a debt, Alex has to start helping Mr. Peterson, but this help turns into a real friendship where they bond over classical music and Kurt Vonnegut. I’m not going to tell you any of the circumstances that lead to Mr. Peterson being in an urn, but you will find out by the end and it comes about in a very interesting way that may make you question what you’d do for friendship.

This book is very quirky. One minute we’re getting a lesson on meteors, meteoroids, and meteorites, the next we’re learning all about Kurt Vonnegut’s works, and the next we’re given a long treatise on tarot card readings. We’re in Alex’s head a lot in this book, so when he’s researching his meteorite and his condition, we’re researching it. Sometimes this slowed down the book, especially in pivotal moments where I wanted to find out what was going to happen, but it was also really interesting. I can’t say I’ve learned so much about such a weird combination of materials all in one piece of fiction.

The people in Alex’s life are also pretty quirky. Alex knows about tarot cards from his hippy, dippy, trippy mother who owns a shop where she reads cards and sells things like crystals, candles, and books about Wicca and astrology. She’s a really cool mother, even if Alex can’t always see it. Mr. Peterson is also pretty cool in that he’s at that great stage in life where he doesn’t give a damn what anyone think so he’s going to say and do any damn thing he pleases, including enjoying his daily dose of Mary Jane.

I really like stories of young people being taught lessons by ornery old folks. We’ve seen this before, this isn’t anything new, but for me it never gets old. The generational differences, the differences in experiences, and they way they grow and learn from each other is what draws me to these kinds of stories, and this is a great one. It’s about friendship, family, science, death, human rights, mathematics, religion, and a little bit of Kurt Vonnegut and I loved it.